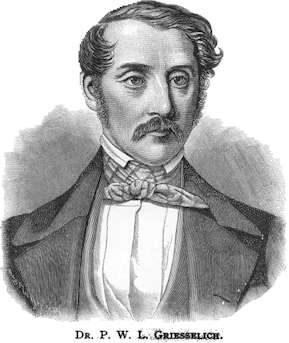 Philip Wilhelm Ludwig Greisselich 1804 - 1848 was a German orthodox physician who converted to homeopathy, an excellent botanist, who became a military physician and a homeopath.

Griesselich was the Surgeon to the Grand Duke of Baden and a Surgeon General who died in Westphalia after being thrown from his horse.

Greisselich was also the editor of the Journal de Griesselich and Hygea.

The Journals and publications of homeopaths informed public opinion considerably more than modern commentors wish to acknowledge. The debate on isopathy is a typical one:

__The allopaths of course, reacted with outrage, accusing homeopathy of being a medieval throwback:

‘The Medical world in general considered isopathy as the acme of homeopathic nonsense. Such a position is no longer tenable since isopathic treatment has been introduced and scientifically entrenched by the anti rabies vaccination of Louis Pasteur and the tuberculosis therapy of Robert Koch. The nonsense has changed into a far seeing heroic hypothesis’. August Bier 1925.

Louis Pasteur watched this debate as it was published in Pierre Dufresne’s Bibliotheque Homeopathique issued from 1832 - 1837, and in Philip Griesselich’s Handbuch, and sixteen lay and professional homeopathic journals published in France between 1834 - 1890.

Isopathy provoked endless arguments in the homeopathic circles: other nineteenth century relevant physicians who employed isopathy were John Ernst Stapf, Johann Gottfried Rademacher (founder of ‘organotherapy’), Charles Edouard Brown Seqard, Arnold, Johann Emanuel Veith, while Griesselich, Edward William Berridge and others disapproved this method because the isopathic substancs were rarely subjected to proving and were not prescribed on the basis of symptom similarity as in the original Samuel Hahnemann’s method

But in spite of everything the “old man,” almost eighty years of age, was physically and mentally fit and cheerful, as Griesselich has so realistically described in his ‘Sketches’ taken in Köthen.

However, Griesselich soon became a radical, who ‘… strongly favoured the nebulous, subtle and metaphysical in Hahnemann’s teachings’:

This radical new isopathic and transcendental homeopathic conception, or ‘agent of change’, which originated about the time of the publication of Samuel Hahnemann’s Chronic Diseases in 1828, [134] soon spawned a new movement within homeopathy, a dangerous and frightening sub-sect [to people like Robert Ellis Dudgeon], gathering to its cause a motley but energetic crew of rebels, dissenters and freethinkers.

Griesselich wrote prodigiously about homeopathy, and his careful work found its way across the World to homeopathic journals everywhere. His works influenced many of the leading homeopaths of the day.

Griesselich was a realist and a true skeptic:

’Many well meaning friends of homeopathy say, that the truth will finally prevail. I cannot concur in this. Truth, I see, never and nowhere prevails… ’