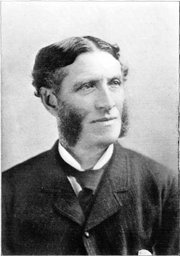 Matthew Arnold 1822 –1888 was an English poet, and cultural critic who worked as an inspector of schools.

He was the son of Thomas Arnold, the famed headmaster of Rugby School, and brother to both Tom Arnold, literary professor, and William Delafield Arnold, novelist and colonial administrator.

Matthew Arnold was an advocate (Matthew Arnold, Clinton Machann, Forrest D. Burt (Eds.), Selected letters of Matthew Arnold, (University of Michigan Press, 1993). Pages 156 and 314) of homeopathy and had many friends who supported homeopathy.

Matthew Arnold was a close friend and neighbour of William Wordsworth, and he was also a friend of John Stuart Blackie,

Once or twice, during my growing up, I saw her (Harriet Martineau). She lived only a mile from Fox How, and was always on friendly terms with my people. Matthew Arnold had a true admiration for her – sturdy fighter that she was in Liberal causes.

Another daughter of his brother Tom Arnold, Julia Arnold, married Leonard Huxley, who was a professional herbalist and the son of Thomas Henry Huxley (who was a friend of John Chapman - his publicist).

Matthew Arnold visited America in 1882 where he  knew James T Fields, one of America’s most famous publisher of American writers, and a partner in Ticknor and Fields, had a bookstore known as Parnassus Corner on Old Corner.

Matthew Arnold often described his duties as a school inspector as “drudgery,” although “at other times he acknowledged the benefit of regular work.” The inspectorship required him, at least at first, to travel constantly and across much of England. “Initially, Arnold was responsible for inspecting Nonconformist schools across a broad swath of central England.

He spent many dreary hours during the 1850s in railway waiting rooms and small town hotels, and longer hours still in listening to children reciting their lessons and parents reciting their greivances. But that also meant that he, among the first generation of the railway age, travelled across more of England than any man of letters had ever done.

Although his duties were later confined to a smaller area, Matthew Arnold knew the society of provincial England better than most of the metropolitan authors and politicians of the day.”

Matthew Arnold is sometimes called the third great Victorian poet, along with Alfred Lord Tennyson and Robert Browning. Matthew Arnold was keenly aware of his place in poetry. In an 1869 letter to his mother, he wrote:

My poems represent, on the whole, the main movement of mind of the last quarter of a century, and thus they will probably have their day as people become conscious to themselves of what that movement of mind is, and interested in the literary productions which reflect it.

It might be fairly urged that I have less poetical sentiment than Alfred Lord Tennyson and less intellectual vigour and abundance than Robert Browning; yet because I have perhaps more of a fusion of the two than either of them, and have more regularly applied that fusion to the main line of modern development, I am likely enough to have my turn as they have had theirs”…

“There are four people, in especial,” he once wrote to Cardinal Newman, “from whom I am conscious of having learnt — a very different thing from merely receiving a strong impression — learnt habits, methods, ruling ideas, which are constantly with me; and the four are — Johann Wolfgang von Goethe, William Wordsworth, Sainte Beuve, and yourself.”