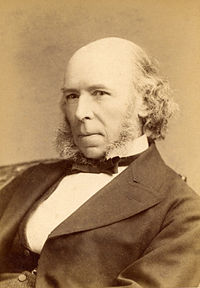 Herbert Spencer was against vaccination, which he saw as medical persecution and social control.

Herbert Spencer was much quoted by homeopaths because his philosophy was so close to theirs. He firmly located mental action within different parts of the cerebrum, and as such was close to the views of John Ruskin and many thinkers who studied phrenology and took the best out of it.

Herbert Spencer was quoted by John Henry Clark and J Ellis Barker in their article The Homeopathic World: Ignorance in High Places. This quote is a misquote from Herbert Spencer, apparently written by William Paley:

‘There is a principle which is a bar against all information, which is proof against all arguments, and which cannot fail to keep a man in everlasting ignorance that principle is contempt prior to investigation.’

Herbert Spencer developed an all-embracing conception of evolution as the progressive development of the physical world, biological organisms, the human mind, and human culture and societies. The lifelong bachelor contributed to a wide range of subjects, including ethics, religion, politics, philosophy, biology, sociology, and psychology.

He is best known for coining the phrase, ”survival of the fittest,” which he did in Principles of Biology (1864), after reading Charles Darwin’s On the Origin of Species. This term strongly suggests natural selection, yet as Spencer extended evolution into realms of sociology and ethics, he made use of Lamarckism rather than natural selection.

Herbert Spencer was born in Derby, England, on April 27, 1820, the son of William George Spencer (generally called George). Spencer’s father was a religious dissenter who drifted from Methodism to Quakerism, and who seems to have transmitted to his son an opposition to all forms of authority. He ran a school founded on the progressive teaching methods of Johann Heinrich Pestalozzi and also served as Secretary of the Derby Philosophical Society, a scientific society which had been founded in the 1790s by Erasmus Darwin, the grandfather of Charles Darwin…

It was publisher John Chapman who introduced him to his salon which was attended by many of the leading radical and progressive thinkers of the capital, including John Stuart Mill, Harriet Martineau, George Henry Lewes and Mary Ann Evans (George Eliot), with whom John Chapman was briefly romantically linked.

Spencer himself introduced the biologist Thomas Henry Huxley, who would later win fame as ’Darwin’s Bulldog’ and who remained his lifelong friend.

However it was the friendship of George Eliot and George Henry Lewes that acquainted him with John Stuart Mill’s A System of Logic and with Auguste Comte’s Positivism and which set him on the road to his life’s work_. _

The first fruit of his friendship with George Eliot and George Henry Lewes was Spencer’s second book the Principles of Psychology, published in 1855, which explored a physiological basis for psychology. The book was founded on the fundamental assumption that the human mind was subject to natural laws and that these could be discovered within the framework of general biology.

This permitted the adoption of a developmental perspective not merely in terms of the individual (as in traditional psychology), but also of the species and the race. Through this paradigm, Spencer aimed to reconcile the associationist psychology of John Stuart Mill’s _A System of Logic_, the notion that human mind was constructed from atomic sensations held together by the laws of the association of ideas, with the apparently more ‘scientific’ theory of phrenology which located specific mental functions in specific parts of the brain.

Spencer argued that both these theories were partial accounts of the truth: repeated associations of ideas were embodied in the formation of specific strands of brain tissue, and these could be passed from one generation to the next by means of the Lamarckian mechanism of use-inheritance.

The _Principles of Psychology_, he modestly believed, would do for the human mind what Isaac Newton had done for matter. However, the book was not initially successful and the last of the 251 copies of its first edition was not sold until June 1861.

Its comparative failure may have contributed to Spencer suffering a nervous breakdown, the symptoms of which were to remain with him for the rest of his life. He suffered from recurrent bouts of insomnia and Beatrice Webb, who befriended him towards the end of his life, alleged that he became a regular morphine user.

Spencer’s interest in psychology derived from a more fundamental concern which was to establish the universality of natural law. In common with others of his generation, including the members of John Chapman’s salon, he was possessed with the idea of demonstrating that it was possible to show that everything in the universe - including human culture, language, and morality - could be explained by laws of universal validity.

This was in contrast to the views of many theologians of the time who insisted that some parts of creation, in particular the human soul, were beyond the realm of scientific investigation. Comte’s Systeme de Philosophie Positive had been written with the ambition of demonstrating the universality of natural law, and Spencer was to follow Auguste Comte in the scale of his ambition.

However, Spencer differed from Auguste Comte in believing it was possible to discover a single law of universal application which he identified with progressive development and was to call the principle of evolution.

In 1858 Spencer produced an outline of what was to become the System of Synthetic Philosophy. This immense undertaking, which has few parallels in the English language, aimed to demonstrate that the principle of evolution applied in biology, psychology, sociology (Spencer appropriated Auguste Comte’s term for the new discipline) and morality.

Spencer envisaged that this work of ten volumes would take twenty years to complete; in the event it took him twice as long and consumed almost all the rest of his long life.

He also became a member of the Athenaeum, an exclusive Gentleman’s Club in London open only to those distinguished in the arts and sciences, and the X Club, a dining club of nine founded by Thomas Henry Huxley that met every month and included some of the most prominent thinkers of the Victorian age (three of whom would become presidents of the Royal Society).

Members included physicist philosopher John Tyndall and Charles Darwin’s cousin, the banker and biologist John Lubbock. There were also some quite significant satellites such as liberal clergyman Arthur Stanley, the Dean of Westminster; and guests such as Charles Darwin and Hermann von Helmholtz were entertained from time to time.

Through such associations, Spencer had a strong presence in the heart of the scientific community and was able to secure an influential audience for his views…

Spencer’s influence among the leaders of thought was also immense, although it was most often expressed in terms of their reaction to, and repudiation of, his ideas. As his American follower John Fiske observed, his work was to be found ‘running like the weft through all the warp’ of Victorian thought.

Such varied thinkers as Henry Sidgwick, T.H. Green, G.E. Moore, William James, Friedrich Wilhelm Nietzsche, Henri Bergson, and Emile Durkheim felt they had no option but to define their ideas in relation to his. Emile Durkheim’s Division of Labour in Society is to a very large extent an extended debate with Spencer from whose sociology, many commentators now agree, Emile Durkheim borrowed extensively.

In post-1863-Uprising Poland, many of Spencer’s views became integral to the dominant ideology, ”Polish Positivism.” The leading Polish writer of the period, Boles?aw Prus, adopted Spencer’s metaphor of society-as-organism, giving it a striking poetic presentation in his 1884 micro-story, ”Mold of the Earth,” and highlighting the concept in the introduction to his most universal novel, Pharaoh (1895)…

Spencer’s thought had penetrated so deeply into the Victorian age that his influence could not disappear entirely. It persisted in the twentieth century at an almost subterranean level, and it is possible to trace unbroken threads of influence from the _System of Synthetic Philosophy_ to the structural-functionalist anthropology of E.E. Evans-Pritchard, to the work of the father of the town planning movement Patrick Geddes, and to the origins of modern ecology.

A line can also be traced from the Principles of Psychology through the works of the neurologist Hughlings Jackson to the early works of Sigmund Freud.

Other Austrians, the logical positivists of the Vienna Circle, claimed him as a forebear, on the grounds that he gave privileged epistemic status to the scientific method, notwithstanding that his philosophy seems to contain many a priori speculations that were antithetical to their conception of philosophical method.

Spencer became very influential in China and Japan largely because he appealed to the reformers’ desire to establish a strong nation-state with which to compete with the Western powers.

He was translated by the Chinese scholar Yen Fu, who saw his writings as a prescription for the reform of the Qing state. Spencer also influenced the Japanese Westernizer Tokutomi Soho, who believed that Japan was on the verge of transitioning from a “militant society” to an “industrial society,” and needed to quickly jettison all things Japanese and take up Western ethics and learning. He also corresponded with Kaneko Kentaro, warning him of the dangers of imperialism…

Spencer also had an influence on literature, as many novelists came to address his ideas in their work. George Eliot, Leo Tolstoy, Thomas Hardy, Boles?aw Prus, Abraham Cahan and D. H. Lawrence all referenced Spencer. Arnold Bennett greatly praised First Principles, and the influence it had on Arnold Bennett may be seen in his many novels. Jack London went so far as to create a character, Martin Eden, a staunch Spencerian.

Herbert George Wells used Spencer’s ideas as a theme in his novella, The Time Machine, employing them to explain the evolution of man into two species.

It is perhaps the best testimony to the influence of Spencer’s beliefs and writings that his reach was so diverse. He influenced not only the administrators who shaped their societies’ inner workings, but also the artists who helped shape those societies’ ideals and beliefs.