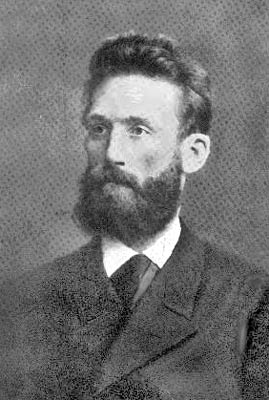 **Wilhelm Ameke **1847 - 1886 was a German orthodox doctor who converted to homeopathy to become one of the great historians of Samuel Hahnemann and of homeopathy, alongside Richard Haehl.

Wilhelm Ameke was the son of a doctor, born in 1847 in Menden/Westfalen. After high school, he studied medicine in 1865 from Wuerzburg. Just one year later he had to rush to finish his studies because of the German French war when he worked as a military doctor.

After the war he studied in Bonn, Marburg and Hall, and completed his doctorate in 1869. In winter 1869-70 he took the state medical examination. However, the strains of the war had undermined his health so far that he suffered digestive disorders, mental fatigue and physical weakness, a disease which could not be diagnosed.

He settled in his home town of Menden down and was head of the local hospital. His deceased father had a wide reputation as a doctor and so he rapidly received many patients in his practice.

“I already have an extensive practice, but practicing as an allopathic doctor, I do not like. Often I am ashamed to prescribe a medicine, which I know from the outset is completely useless. What do you do with Homeopathy? Because your father is a homeopath, you have already taken a closer look. I would like the to investigate this method.”

Without waiting for any response from his friend, he closed his medical practice in Menden and moved to Köthen to attend the clinic of Arthur Ernst Lutze and to study the theory and practice of homeopathy. He then spent several months with his friend Dr. Sulzer in Berlin, where he studied homeopathy.

In the autumn of 1872 he settled in Wuerzburg, where he remained for three years. But because of his strong interest in homeopathic literature, he moved to Berlin (in particular because of the homeopathic library in the Berlin Library Association).

Here he wrote his book ”The creation and control of homeopathy” in which he showed his intense interested in the attacks against homeopathy. After completion of this book (1885), he was noticeably weaker. His digestive disorders were stronger, it turned fever and the suspicion of intestinal tuberculosis arose.

Shortly before his death, he developed a slight cough with little ejection, then his suspicions were confirmed. Wilhelm Ameke died at the age of 39 years, in1886.

He was an ardent advocate of homeopathy and his book and several journal articles were written in the Berlin Homeopathic Medical Association, in which he was very active.

Wilhelm Ameke wrote History of Homœopathy : Its Origin ; Its Conflicts, Ueber Behandlung der Aneurysmen durch spitzwinklige Flexion der Glieder and several other works in German which have not been translated into English.