Margery Grace Blackie (1898 - 1981) was an orthodox doctor who converted to homeopathy to become the homeopath of Queen Elizabeth II. 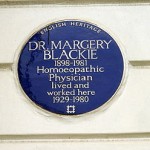 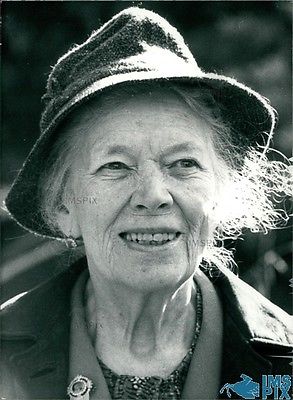 The Annual Reports list the teaching staff, many of whom are recognised for their contributions to the development of homeopathy. Donald MacDonald Foubister lectured on Children’s Diseases, as did Kathleen Priestman (who was President of the MSM between 1981 and 1991); Alva Benjamin taught on skin diseases, Charles Edwin Wheeler, John MacKillop and Muriel Francis Adams on general medicine; William Eldon Tucker and Philip Norman Cutner on surgery and H Dodd, who was the vascular surgeon and later became President of MSM in 1952.

N E Gillham taught dentistry and J N LeRossignol chiropody. Three doctors on the teaching staff were later appointed Royal physicians: John Weir, Marjorie Blackie and Ronald W Davey. Llewelyn Ralph Twentyman remains the doyen of them all, surviving to tell the tale of the lectures often given in the Hospital Board Room, which were much enjoyed by everyone.

See https://en.wikipedia.org/wiki/Margery_Blackie#/media/File:Dr.Margery_Blackie Margery Grace Blackie was born at Redbourn, Hertfordshire, England in 1898. She qualified in medicine at the London School of Medicine for Women in 1923, and in the following year joined the staff of the London Homeopathic Hospital.

Here she came under the teaching influence of John Henry Clarke, Charles Edwin Wheeler and Douglas Morris Borland, himself a former student of James Tyler Kent. She obtained her M.D. from the London School of Medicine for Women in 1923.

During her career she combined a busy homeopathic general practice with her hospital work, which culminated in her appointment in 1966 as Honorary Consultant Physician to the Royal London Homeopathic Hospital.

She was Dean of the Faculty of Homoeopathy from 1965 to 1979. She was appointed Physician to Queen Elizabeth II in 1968.

She was admired by her patients for her concerned approach, kindness, and skill. Dr. Blackie died in 1981.

It is as a brilliant teacher, whose vivid descriptions of various constitutional types of patients became engraved in the minds of her listeners, that her undergraduate and postgraduate students remember her. It was this deep understanding of the characteristics of the individual remedy that formed the basis of her international reputation.

Homeopathic pioneer Margery Blackie was commemorated with an English Heritage Blue Plaque on 12 October at 3pm at 18 Thurloe Street, London, SW7 where the homeopathic physician lived and worked from 1929 to 1980. The Blue Plaque was unveiled by HRH Princess Alexandra.

Margery Blackie was born in Hertfordshire in 1898, the daughter of a leading homeopath. At the age of five Blackie declared that she wanted to become a doctor, such was the influence of her uncle James Compton Burnett, a leading homeopath himself, and his work upon her.

Blackie entered the London School of Medicine for Women in 1917 and before qualifying became a Resident at the London Homeopathic Hospital. Her experiences at the hospital confirmed her belief in homeopathy, and in 1926 she set up her own practice in Kensington. Here, she developed sound consulting room methods and encouraged patients to tell their story in their own way, while also making a clinical diagnosis of her patients, using conventional methods such as x-rays and pathological tests. Her aim was simple - to understand her patients as deeply as possible.

During the 1930’s, Blackie continued to work at the London Homeopathic Hospital, but spent most of her time developing her own practice. Her flair for diagnosis had become legendary. Patients included a number of public figures such as Julia Myra Hess and Julia de Beausobre Lady Namier.

In 1949, Blackie was elected President of the revitalised Faculty of Homoeopathy. This was a major achievement; she was the only woman office holder in the Faculty – and marked a phase in her life. She took the lead amongst her British colleagues and mixed frequently with homeopaths from all over the world.

In 1964, Blackie was elected Dean of the Faculty of Homoeopathy, with responsibility for all teaching. It was from this position that Blackie influenced a whole generation of homeopathic doctors.

In 1969, in a moment which marked the climax of her career, Blackie was appointed Physician toQueen Elizabeth II. By the mid-1970’s, Blackie’s own health was in decline, but she continued to see patients at 18 Thurloe Street, London, SW7 until 1980, when she left London to retire to Hedingham Castle in Essex. It was there that she died on 24 August 1981.

18 Thurloe Street, London, SW7 was ideally suited to Blackie and served as her home as well as her consulting room. It had a homely atmosphere, and there was always an open fire in the consulting room to welcome patients, students and homeopaths, who would travel from all over the world to sit in during her surgeries.

Margery Blackie was the most outstanding homeopathic doctor of her generation; admired by homeopathic and conventional physicians alike. Her sound medical practice and enthusiasm for homeopathy led to its increased acceptance by the wider medical world.

Margery Blackie wrote The Patient, Not the Cure and the Classical Homeopathy.