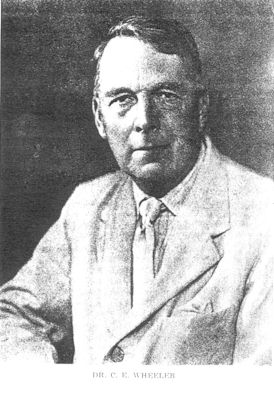 Charles Edwin Wheeler 1868 - 1946 was born in Australia, an orthodox physician who converted to homeopathy, and who was editor of The Homeopathic World 1910-1917 and the President of Liga Medicorum Homeopathica Internationalis in 1936. Wheeler was a member of the influential Cooper Club (http://www.homeoint.org/morrell/british/late19.htm) which met between its formation in 1870 until approximately 1914.

Charles Edwin Wheeler was the homeopath of A J P Taylor,

Wheeler was a life long friend of Harley Granville Barker and he also knew August Bier,

Charles Edwin Wheeler was an “acquaintance of Edward Bach, a friendship which began in the early twenties.”

From http://www.homeoint.org/morrell/articles/bach.htm Later Wheeler says, “we had rooms in the same house and saw a great deal of one another.” Wheeler found him to be “free from any taint of self-seeking…single minded in altruism…[and] courageous in asserting what he felt to be the truth.” …

Wheeler forms an important connecting link between those nineteenth century figures like James Compton Burnett and Robert Thomas Cooper, and later figures like John Henry Clarke, Edward Bach and John Paterson. This view recognises that they all existed in the tiny community of homeopaths in London between about 1890-1930 and all knew each other to some degree.

Some, like the members of the so-called ‘Cooper Club,’ were on very intimate daily contact. The Cooper Club “were responsible for the development of many new remedies [mostly nosodes] and of various approaches within the context of Samuel Hahnemann’s medical system.”

It also recognises that Charles Edwin Wheeler, Edward Bach and John Paterson all worked on the bowel flora and on developing the bowel nosodes in the 1910-40 period. Therefore, the possible link connecting Robert Thomas Cooper and Edward Bach is not as tenuous as it might otherwise appear.

John Henry Clarke was also a big friend of Robert Thomas Cooper who originally used the sunshine method of remedy preparation, [‘arborivital medicine’] as also was Edward Bach had worked on nosodes. Therefore, the claim that Edward Bach did not know about sunshine making remedies looks far less credible, the deeper one probes into that very small world of British homeopathy, 1900-1930; that all these people knew each other and were on friendly terms…

… the Bowel Nosodes were introduced by British homeopaths, Edward Bach, John Paterson and Charles Edwin Wheeler in the 1920s. Their use is based on the variable bowel bacterial flora associated with persons of different homeopathic constitutional types…

From http://www.homeoint.org/morrell/british/late19.htm#cooperclub  At the turn of the century there were four distinct though entangled threads emerging in UK homeopathy. They were the Cooper Club, the increased use of nosodes, the influence of James Tyler Kent and the general decline of medically qualified practice, which coincided with the rise of the lay practitioner…

The second main phase of British homeopathy was undoubtedly the main figures of the Cooper Club… four distinguished homeopathic doctors used to meet regularly and were to have a major influence on its future.

And, after the death of Thomas Skinner in 1906, John Henry Clarke continued the tradition by maintaining vigorous links with other major British homeopaths and by having regular meetings for the discussion of new ideas and of cases.

These meetings continuing after 1906 were with a select band of people who were in effect tutored by John Henry Clarke in all aspects of homeopathy. This also took place outside the British Homeopathic Society, with which John Henry Clarke more or less severed all contact after 1908.

It also included several people who were medically unqualified amateur practitioners. This group included Noel Puddephatt, Canon Roland Upcher and J Ellis Barker, who, as protégés of John Henry Clarke, soon became important torch bearers for the movement well into the twentieth century… I have not yet seen any material evidence that the other members of the Cooper Club taught non-doctors, but they may well have done so in secret.

It would not be surprising considering that John Henry Clarke despised the rest of his profession as traitors of homeopathy in general and of British working-people in particular.

John Weir and Charles Edwin Wheeler were also members. One suspects that Edward Bach, J D Kenyon, Percival George Quinton and several others were also members, and taught lay persons, though there is no direct evidence and an air of secrecy shrouds the group.

Charles Edwin Wheeler was a colleague of Douglas Morris Borland and a teacher of Margery Blackie. At the 2003 Blackie Memorial Lecture, Galen Ives told us that:

Dr. Wheeler, who we mentioned earlier, had realised that you needed to have consecutive cases. Margery Blackie presented cases, but you might call them uncontrolled, carefully selected series of 1, 2 or 3 patients, and Dr. Wheeler had realised that one needed to have consecutive cases in order to try and minimise selection bias. He thought a hundred would suffice. Now you have to remember that, at this time, randomised controlled trials were only just starting. This is 53 years ago.

Charles Edwin Wheeler was an Associate Permanent Secretary and then President of the Liga Medicorum Homeopathica Internationalis.

Edwin Wheeler 1831 - ? was a homeopathic chemist in Cheltenham and in Bristol,

Francis James Wheeler 1877 - 1960 MRCS, LRCP [?relative of Charles Edwin Wheeler] was a British orthodox physician who converted to homeopathy. He came from Southport and who was a friend and colleague of Edward Bach, and he helped to prove the flower remedies as each was discovered. Author of The Bach Remedies Repertory, Some observations on primary carcinoma of the liver: with references to museum specimens, _and co- editor of The Bach Flower Remedies: Including Heal Thyself, the Twelve Healers, the Bach Remedies Repertory, Samuel Hahnemann, his life and work: based on recently discovered state papers, documents, letters, &c, and A case of Appendicitis_.

? Wheeler (?-?) was a homeopath in Clapton, who left his practice in the hands of Gerard Smith and emigrated to Australia to practice in Melbourne in 1889,