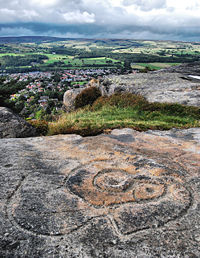 Edmund Smith 1804 - 1864 was a homeopath and the proprietor of Ilkley Wells House, a homeopathic treatment facility, built around 1854-56 where he treated Charles Darwin.

Edmund Smith was an orthodox doctor who converted to homeopathy, and he previously worked as a surgeon in the Hudson Bay Company’s service.

Edmund Smith died at the age of 59 and his obituary is in the The Gentleman’s Magazine in 1864 where it states that he was created an MD by the Archbishop of Canterbury in 1858, and that he worked at Ilkley Wells House and as a surgeon to the Hudson Bay Company.

Ilkley is a spa town and civil parish in West Yorkshire, in the north of England. Ilkley civil parish includes the adjacent village of Ben Rhydding and is a ward within the metropolitan borough of Bradford.

Approximately 12 miles (19.3 km) north of Bradford, the town lies mainly on the south bank of the River Wharfe in Wharfedale, one of the Yorkshire Dales. The parish has a population of 13,828.

With its spa town heritage and surrounding countryside, Ilkley’s main industry is tourism. The town centre is characterised by Victorian architecture, wide streets and floral displays. Ilkley Moor (to the south of the town) is the location of a Yorkshire folk song, ”On Ilkla Moor Baht ‘at” (“On Ilkley Moor without a hat”)…

In the 17th and 18th centuries the town gained a reputation for the efficacy of its water. In the 19th century it became established as a fashionable spa town, with the construction a mile to the east of the town, at Wheatley, of the vast Ben Rhydding Hydro or Hydropathic Establishment between 1843 and 1844. Tourists flocked here to ‘take the waters’ and bathe in the cold water spring. Wheatley today is called Ben Rhydding after the Hydro (since demolished).

Development based on the Hydro movement, and upon the establishment of a number of convalescent homes and hospitals, was accelerated by the establishment of a railway connection from Leeds and Bradford in 1865. Charles Darwin underwent hydropathic treatment at Ilkley Wells House when his The Origin of Species was published in November 1859, staying with his family at the nearby North View House (now Hillside Court). Other Victorian visitors to the town include Madame Tussaud.

Today, the only remaining Hydro is the white cottage known as White Wells House, which can be seen and visited on the edge of the moor over looking the town…

Between the 5 and 17 August 1923, philosopher and educator Rudolf Steiner delivered a series of fourteen lectures at Ilkley which were published as A Modern Art of Education. They provided a comprehensive overview of Waldorf education. In his report of the event, which embodies the language of his distinctive philosophical approach, he commented on the town’s archaeological heritage:

E G Smith was on the Management Committee of the Bath Homeopathic Dispensary,