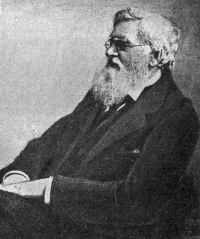 Alfred Russel Wallace is best known for independently proposing a theory of natural selection which prompted Charles Darwin to publish on his own theory. Charles Lyell and Joseph Dalton Hooker were instrumental in arranging the peaceful co-publication of the theory of natural selection by Charles Darwin and Alfred Russel Wallace in 1858: each had arrived at the theory independently…

Alfred Russel Wallace was a friend (Harison Delivan Barrett, Life Work of Mrs. Cora L.V. Richmond, (Hack & Anderson, 1895). Page 253) of homeopath James John Garth Wilkinson, and he also took every opportunity to attend the lectures of Spencer Timothy Hall (Ross A. Slotten, The Heretic in Darwin’s Court: The Life of Alfred Russel Wallace, (Columbia University Press, 13 Aug 2013). Page 234), the most eloquent spokesman for the new science of Mesmerism and homeopathy. Wallace campaigned widely against the bigotry of some scientific men, and thus became somewhat of a hero to homeopaths in Britain and in America (Anon, The Homeopathic World, Volume 41, (1906). Page 100. Se also Anon, The North American Journal of Homeopathy, Volume 66, (American Medical Union, 1918). Page 1045).

Alfred Russel Wallace was an anti vaccinationist, and he wrote A Summary of the Proofs That Vaccination Does Not Prevent Smallpox but Really Increases It for the National Anti Vaccination League in 1904: From http://www.whale.to/a/wallace.html ‘… That fearful (smallpox) mortality destroyed the faith of Leicester in vaccination. Poor and rich alike, the workers and even the municipal authorities began to refuse vaccination for their children. This refusal continued till, in 1890, instead of 95 percent the vaccinations reached only 5 percent of the births! As this ominous decrease of vaccination went on the doctors again and again prophesied against it, that once small-pox was introduced it would run through the town like wildfire and decimate the population. Yet it has been introduced again and again, but it has never spread; and from that day to this no town in the kingdom of approximately equal population has had such a very low small-pox mortality as this almost completely unvaccinated and—as the doctors say—unprotected population!...’

From http://en.wikipedia.org/wiki/Alfred_Russel_Wallace#Spiritualism ‘… In the early 1880s, Wallace was drawn into the debate over mandatory smallpox vaccination. Wallace originally saw the issue as a matter of personal liberty; but, after studying some of the statistics provided by anti-vaccination activists, he began to question the efficacy of vaccination. At the time, the germ theory of disease was very new and far from universally-accepted. Moreover, no one knew enough about the human immune system to understand why vaccination worked. When Wallace did some research, he discovered some cases where supporters of vaccination had used questionable statistics. Always suspicious of authority, Wallace became convinced that reductions in the incidence of smallpox that had been attributed to vaccination were, in fact, due to better hygiene and improvements in public sanitation. He also suspected that physicians had a vested interest in promoting vaccination…’

This campaign resulted from Abel’s Law in 1875. William Wilfred Abel Ryder (?-?) refused to have his third son vaccinated against small pox because he had already lost two sons to the vaccine. He was imprisoned and charged, but his staunch refusal led to the current laws on vaccination which states these cannot be mandatory. ’… Abel Ryder, grocer… was put in prison without hard labour for refusing to have his child vaccinated. Mr. Ryder has been before the Bench of Magistrates several times respecting the vaccination of his children, always conducting his own defence in a very clever manner. Once he outwitted the Bench by pointing out that the magistrate who signed the order for him to show cause why he should not have his child vaccinated was not present to hear the case…’ (George James Dew, Oxfordshire village life: the diaries of George James Dew (1846-1928), relieving officer, (Beacon Publications, 1983). Page 62 See also Anon, The Medical Times and Gazette, Volume 2, (J. & A. Churchill, 1875). Page 576. See also Anon, The Medical Press and Circular, (1875). Page 393. See also Alfred Russel Wallace, Andrew Berry (Ed.), Infinite Tropics: An Alfred Russel Wallace Anthology, (Verso, 1 Nov 2003). Page 337. See also Alfred Russel Wallace, William Tebb, Charles Woodhull Eaton, John W. Hodge (M.D.), Thomas Nichol, Charles Fessenden Nichols, John H. Bonner (Eds), Pamphlets - homoeopathic: Vaccination, compulsory medicine, (1907). Page 53).

Wallace declared that he no longer believed in God, and he turned his attention towards the sciences, which together with ‘… his increasing love of Nature…’ led him to support Mesmerism and Phrenology (Janet Oppenheim, The Other World: Spiritualism and Psychical Research in England, 1850-1914, (Cambridge University Press, 26 Feb 1988. See also Jonny Zucker, Ivor Baddiel, Never In A Million Years, (Hachette UK, 21 Oct 2011)). Page 305). Wallace also became a spiritualist, and he was a friend of homeopath James John Garth Wilkinson (who he met through William and Mary Howitt (John Benedict Buescher, The Remarkable Life of John Murray Spear: Agitator for the Spirit Land, (University of Notre Dame Press, 15 Sep 2006). Pages 256-257), and possibly again at the home of John Epps, they met again on the anti compulsory vaccination campaign).

Despite the fact that due to his belief in spiritualism, Wallace had crossed the border between scientific respectability and belief, Wallace attended seances with Daniel Dunglas Home. Wallace no longer saw Natural Selection as the agent of human progress, believing to his end that the spiritual influences on humanity far outweighed any influences from the material World (John Benedict Buescher, The Remarkable Life of John Murray Spear: Agitator for the Spirit Land, (University of Notre Dame Press, 15 Sep 2006). Pages 256-257. See also Hudson Tuttle, James M. Peebles, The year-book of spiritualism for 1871: presenting the status of spiritualism for the current year throughout the world; philosophical, scientific, and religious essays, review of its literature; history of American associations; state and local societies; progressive lyceums; lecturers; mediums; and other matters relating to the momentous subject, (William White and Company, 1871). Page 156.  See also http://en.wikipedia.org/wiki/Alfred_Russel_Wallace#Spiritualism See also http://www.answers.com/topic/spiritualism-great-britain (quoted from The Gale Encyclopaedia of Occultism)).

From http://en.wikipedia.org/wiki/Alfred_Russel_Wallace ’… Wallace became a spiritualist. At about the same time, he began to maintain that natural selection cannot account for mathematical, artistic, or musical genius, as well as metaphysical musings, and wit and humour. He eventually said that something in “the unseen universe of Spirit” had interceded at least three times in history. The first was the creation of life from inorganic matter. The second was the introduction of consciousness in the higher animals. And the third was the generation of the higher mental faculties in mankind.

Wallace also believed that the raison d’être of the universe was the development of the human spirit. These views greatly disturbed Charles Darwin, who argued that spiritual appeals were not necessary and that sexual selection could easily explain apparently non-adaptive mental phenomena.

While some historians have concluded that Wallace’s belief that natural selection was insufficient to explain the development of consciousness and the human mind was directly caused by his adoption of spiritualism, other Wallace scholars have disagreed, and some maintain that Wallace never believed natural selection applied to those areas.

Reaction to Wallace’s ideas on this topic among leading naturalists at the time varied. Charles Lyell endorsed Wallace’s views on human evolution rather than Charles Darwin‘s. However, many, including Thomas Henry Huxley, Joseph Dalton Hooker, and Charles Darwin himself, were critical…

Wallace began investigating spiritualism in the summer of 1865, possibly at the urging of his older sister Fanny Sims, who had been involved with it for some time. After reviewing the literature on the topic and attempting to test the phenomena he witnessed at séances, he came to accept that the belief was connected to a natural reality.

For the rest of his life, he remained convinced that at least some séance phenomena were genuine, no matter how many accusations of fraud sceptics made or how much evidence of trickery was produced…

Spiritualism appealed to many educated Victorians who no longer found traditional religious doctrine, such as that of the Church of England, acceptable yet were unsatisfied with the completely materialistic and mechanical view of the world that was increasingly emerging from 19th-century science.

However, several scholars who have researched Wallace’s views in depth have emphasized that, for him, spiritualism was a matter of science and philosophy rather than religious belief. Among other prominent 19th century intellectuals involved with spiritualism were the social reformer Robert Owen, who was one of Wallace’s early idols, the physicists William Crookes and Lord Rayleigh, the mathematician Augustus De Morgan, and the Scottish publisher Robert Chambers.

Wallace’s very public advocacy of spiritualism and his repeated defence of spiritualist mediums against allegations of fraud in the 1870s damaged his scientific reputation. It strained his relationships with previously-friendly scientists such as Henry Bates, Thomas Henry Huxley, and even Charles Darwin, who felt he was overly-credulous. Others, such as the physiologist William Benjamin Carpenter and zoologist E. Ray Lankester became openly and publicly hostile to Wallace over the issue.

Wallace and other scientists who defended spiritualism, notably William Crookes, were subject to much criticism from the press, with The Lancet as the leading English medical journal of the time being particularly harsh. The controversy affected the public perception of Wallace’s work for the rest of his career…

Wallace was also a colleague of John Stuart Mill and contributed several articles on political and social issues between 1873 and 1879, when, aged 56, he entered the debates over trade policy and land reform in earnest:

From http://en.wikipedia.org/wiki/Alfred_Russel_Wallace In 1881, Wallace was elected as the first president of the newly formed Land Nationalisation Society. In the next year, he published a book, Land Nationalisation; Its Necessity and Its Aims, on the subject. He criticized the UK’s free trade policies for the negative impact they had on working class people.

In 1889, Wallace read Looking Backward by Edward Bellamy and declared himself a socialist. These ideas led him to oppose both Social Darwinism and Eugenics, ideas supported by other prominent 19th century evolutionary thinkers, on the grounds that contemporary society was too corrupt and unjust to allow any reasonable determination of who was fit or unfit…

Wallace wrote extensively on other social topics including his support for woman’s suffrage, and the dangers and wastefulness of militarism.Wallace continued his social activism for the rest of his life, publishing the book The Revolt of Democracy just weeks before his death.

Wallace was an extremely-prolific author. In 2002, a historian of science published a quantitative analysis of Wallace’s publications. He found that Wallace had published 22 full-length books and at least 747 shorter pieces, 508 of which were scientific papers (191 of them published in Nature). He further broke down the 747 short pieces by their primary subjects as follows. 29% were on biogeography and natural history, 27% were on evolutionary theory, 25% were social commentary, 12% were on Anthropology, and 7% were on spiritualism and Phrenology.