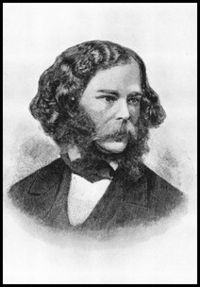 George Henry Lewes was born in London, a grandson of Charles Lee Lewes, the actor. He was educated in London, Jersey, Brittany, and finally at Dr Charles Burney’s school in Greenwich.

Having abandoned successively a commercial and a medical career, he seriously thought of becoming an actor and appeared several times on stage between 1841 and 1850. Finally he devoted himself to literature, science and philosophy.

As early as 1836 he belonged to a club formed for the study of philosophy, and had sketched out a physiological treatment of the philosophy of the Scottish school.

George Lewes’s wife George Eliot, her real name was Mary Ann Evans, was a patient of James Manby Gully, and his colleague John Chapman also a homeopath, and they had many friends who supported homeopathy.

Thornton Arnot Lewes, one of George Henry Lewes sons, used homeopathy when he was abroad in Piertermartizburg.

George Lewes wrote a famous book about the life of Johann Wolfgang von Goethe, _The Story of Goethe’s Life_. He also reviewed to work of John Stuart Mill’s A System of Logic which used many homeopathic analogies in his writings.

George Henry Lewes was a member of the Friends of Italy alongside John Epps in 1851.

In view of the enormous success of Jane Eyre, she was persuaded by her publisher to visit London occasionally, where she revealed her true identity and began to move in a more exalted social circle, becoming friends with Harriet Martineau, Elizabeth Cleghorn Gaskell, William Makepeace Thackeray and George Henry Lewes. Her book had sparked a movement in regards to feminism in literature.

George Lewes and his wife George Eliot were also proponents of phrenology. George Lewes wrote about this subject and found some of the ideas therein ’revolutionary‘, thus agreeing with his friend James John Garth Wilkinson.

They both agreed that Franz Joseph Gall had made a qualitative leap in the understanding of human psychology by assigning mental functions to underlying biology, taking the radical building blocks of fresh new ideas, though ultimately, George Lewes rejected the ‘science of phrenology‘.

In this respect, George Lewes was typical of the radical free thinkers of his age who were perfectly content to consider new ideas and take the radical core forward, rather than throw all the babies out with the bathwater, a technique so typical of today’s industrial, fundamentalist and dogmatic groupthink.

George Lewes and his colleagues were however, desperate to develop new sciences to dispense with the dried up old radical dogmas of the past, such is the fate of all fundamentalists.

During the next ten years Lewes supported himself by contributing, to quarterly and other reviews, articles discussing a wide range of subjects, often imperfect but revealing acute critical judgment enlightened by philosophic study…

From about 1853 Lewes’s writings show that he was occupying himself with scientific and more particularly biological work, though he always showed a distinctly scientific bent in his writings. Considering that he had not had technical training these studies are a testimony to his intellect.

More than popular expositions of accepted scientific truths, they contain able criticisms of conventionally accepted ideas and embody the results of individual research and individual reflection.

He made several suggestions, some of which have since been accepted by physiologists, of which the most valuable is that now known as the doctrine of the functional indifference of the nerves — that what were known as the specific energies of the optic, auditory and other nerves are simply differences in their mode of action due to the differences of the peripheral structures or sense-organs with which they are connected.

The first two volumes on The Foundations of a Creed laid down Lewes’ foundation — a rapprochement between metaphysics and science. He was still positivist enough to pronounce all inquiry into the ultimate nature of things fruitless: what matter, form, and spirit are in themselves is a futile question that belongs to the sterile region of “metempirics”.

George Henry Lewes wrote Comte’s Philosophy of the Sciences, The Story of Goethe’s Life, Goethe’s Life at Weimar: 1775 to 1779, Ranthorpe, The history of philosophy from Thales to Comte, The Biographical History of Philosophy: From Its Origin in Greece Down to the Present Day, The Physiology of Common Life, Aristotle: A Chapter from the History of Science, Sea-side Studies at Ilfracombe, Tenby, The Scilly Isles, & Jersey, Problems of Life and Mind, Studies in Animal Life, On Actors and the Art of Acting, The Principles of Success in Literaturewith Fred Newton Scott, The Life of Maximilien Robespierre, The Physicial Basis of Mind, Science and Speculation, The Ethics of Aristotle: The Nicomachean Ethics with Drummond Percy Chase, The Game of Speculation: A Comedy, in Three Acts with Honore de Balzac and Thomas Hailes Lacy, The Spanish Drama: Lope de Vega and Calderon, Sunshine Through the Clouds a Drama in One Act with Emile de Girardin, Buckstone’s Adventure with a Polish Princess an Original Farce in One Act, The Noble Heart a Play in Three Acts: A Play in Three Acts, A Strange History a Dramatic Tale in Eight Chapters with Charles James Mathews, A Chain of Events a Dramatic Story in Eight Acts with Charles James Mathews, Give a Dog a Bad Name a Farce in One Act, The Noble Heart a Tragedy in Three Acts, The Foundations of a Creed, The Lawyers: A Comedy in Three Acts, Rose, Blanche and Violet, Selections from the Modern British Dramatists,