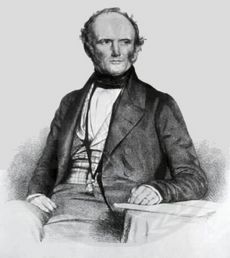 **Charles Lyell **1797-1875 was a Scottish lawyer, geologist, and protagonist of uniformitarianism. He was the foremost geologist of his day, and an influence on the young Charles Darwin.

Charles Lyell was a friend to many homeopaths and homeopathic supporters.

‘… [letter 3.12.1894] My granddaughters E & F Pertz, are also great granddaughters by marriage of Leonard Horner, & so of Francis Horner; so I have some touch of Scotland: also by my first cousins, the Horsburghs. The cousin of my girls by marriage is Leonard Lyell, MP for Orkney and Shetland. He is I am sorry to say a Gladstone Baronet… (Cecilia Helena Payne Gaposchkin, Katherine Haramundanis (Ed.), Cecilia Payne Gaposchkin: An Autobiography and Other Recollections, (Cambridge University Press, 21 Mar 1996). Pages 79-80. See also Swedenborg Archives K125 [15] letter dated 3.12.1894 from Garth Wilkinson to John Thomson)…’

Charles Lyell visited America in 1842 when he became friendly with Eliza Middleton Fisher, an advocate of homeopathy.

In 1865, President Charles Lyell presided over a meeting of the British Association for the Advancement of Science, when Ezekiel Brown Elliott (1823-1888) of Washington presented a paper On Military Statistics of Certain Armies, concerning the mortality of United States Volunteers during the fourteen months from July, 1861, to August, 1862, inclusive, as published in The Reader in London (Anon, Transactions, Volume 3, Homeopathic Medical Society of the State of New York, (C. Wendell, Albany, 1865). Page 389). This paper explained that: ‘… Two per cent of deaths were from rebel bullets, and over five per cent from disease and accidents. Whenever homeopathic physicians have had the privilege of comparing results of treatment with their allopathic opponents__, they have demonstrated that the mortality, attending their treatment, is not one half that of the allopathic school. Hence two and hone half per cent of the above loss could have been saved if homeopathy had been employed. The loss of life through allopathic dosing exceeds the loss from rebel missiles of war, and yet the fatal drugging system continues to receive support…’

Lyell supported himself by writing books about his scientific work. He came from a prosperous family, worked briefly as a lawyer in the 1820s, and held the post of Professor of Geology at King’s College London in the 1830s, but from 1830 onward his books provided both a comfortable living and growing fame.

Each of his three major books was a work continually in progress. All three went through multiple editions during his lifetime, and Lyell used almost every edition as an opportunity to incorporate additional material, rearrange existing material, and revisit old conclusions in light of new evidence.

These frequent, substantial revisions added significant value to new editions of Lyell’s books, and helped to ensure robust sales to both the scientific community and the general public.

Principles of Geology, Lyell’s first book, was also his most famous, most influential, and most important. First published in three volumes in 1830-33, it established Lyell’s credentials as an important geological theorist and introduced the doctrine of uniformitarianism…

The Beagle returned at the start of October 1836. Lyell invited Charles Darwin to dinner on 29 October 1836 and from then on they were close friends. Although Charles Darwin tentatively discussed evolutionary ideas with him from 1842, Lyell continued to firmly reject the idea of organic evolution in each of the first nine editions of Principles of Geology.

He encouraged Charles Darwin to publish, and following the 1859 publication of On the Origin of Species, Lyell finally offered a tepid endorsement of evolution in the tenth edition of Principles of Geology.

The book went through six editions, eventually growing to two volumes and ceasing to be the inexpensive, portable handbook that Lyell had originally envisioned.

Late in his career, therefore, Lyell produced a condensed version titled Student’s Elements of Geology that fulfilled the original purpose.

Geological Evidences of the Antiquity of Man brought together Lyell’s views on three key themes from the geology of the Quaternary Period of Earth history: glaciers, evolution, and the age of the human race. First published in 1863, it went through three editions that year, with a fourth and final edition appearing in 1873.

The book was widely regarded as a disappointment because of Lyell’s equivocal treatment of evolution. Lyell, a devout Christian, had great difficulty reconciling his beliefs with natural selection…

Lyell’s geological interests ranged from volcanoes and geological dynamics through stratigraphy, paleontology and glaciology to topics that would now be classified as prehistoric archaeology and paleoanthropology.

He is best known, however, for his role in popularising the doctrine of uniformitarianism… Later, Charles Darwin became a close personal friend, and Lyell was one of the first scientists to support On the Origin of Species, though he did not subscribe to all its contents. Lyell was also a friend of Charles Darwin’s closest colleagues, Joseph Dalton Hooker and Thomas Henry Huxley, but unlike them he struggled to square his religious beliefs with evolution. This inner struggle has been much commented on. He had particular difficulty in believing in natural selection as the main motive force in evolution…

Lyell and Joseph Dalton Hooker were instrumental in arranging the peaceful co-publication of the theory of natural selection by Charles Darwin and Alfred Russel Wallace in 1858: each had arrived at the theory independently…

Alfred Russell Wallace is best known for independently proposing a theory of natural selection which prompted Charles Darwin to publish on his own theory.