Curie was a student of Samuel Hahnemann, and the homeopath of Charlotte, Countess Canning, William Sewell, and Thomas Egerton 2nd Earl of Wilton (and of his children’s governess), and he a colleague of Francis Black Simon Felix Camille Croserio, Harris F Dunsford, Thomas Engall, John Epps, Thomas Roupell Everest, George Fearon, Richard Walter Heurtley, Gottlieb Heinrich Georg Jahr, Joseph Kidd, Joseph Laurie, William Leaf, William Henry Mayne, John Ozanne, Frederick Hervey Foster Quin, Samuel Thomas Partridge, Antoine Henri Petroz, Henri Petroz, Marmaduke Blake Sampson, Jean Paul Tessier Senior, Vienttinghoff, and James John Garth Wilkinson (Curie was James John Garth Wilkinson’s teacher ‘… It may interest you to know that I am the nephew by marriage of Professor William Sewell, for long the most famous Veterinarian in England, & for 50 years virtually the head of the Veterinary College. I lived with him, & attended his lectures, & the practice of the College. He was one of the finest & noblest Gentlemen I ever knew, A Quaker by Descent, connected to the Penn Family. He was Veterinary Advisor to the East India Company. He died in a good old age, attended Homeopathically by Dr. Curie & myself…’ _Swedenborg Archive K125 [2] letter dated 2.11.1894 from James John Garth Wilkinson to William Boericke_).

William Charles Ellis applied to Frederick Hervey Foster Quin for more information about homeopathy, and as a result, Frederick Hervey Foster Quin sent him his colleagues Guiseppe Belluomini, Harris F Dunsford, and Paul Francois Curie to assist him at Hanwell Lunatic Asylum at William Charles Ellis’s invitation. (note Charles Augustus Tulk 1786 - 1849, a close colleague of  James John Garth Wilkinson, was Chairman of the Hanwell Asylum in the 1840s ref: The Swedenborg Society: a very short history by Richard Lines Company Secretary and past President of the Swedenborg Society).

Paul Francois Curie was a French army surgeon who was a Consultant at the Military Hospital in Upper Alsace when he converted to homeopathy.

Paul Francois Curie was a Saint Simonist. As a thinker Henri de Saint Simon was not particularly systematic, but his great influence on modern thought is undeniable, both as the historic founder of French socialism, which influenced the thought of Karl Marx, and as suggesting much of Auguste Comte’s theory of industrial progress, which in turn influenced Emile Durkheim.

At first, Paul Francois Curie despaired about the complexity of homeopathy, although Samuel Hahnemann was unworried.

Antoine Henri Petroz, a physician of “high standing” in Paris, gathered homeopaths around him - Gottlieb Heinrich Georg Jahr, Paul Francois Curie, and Simon Felix Camille Croserio among them. Curie moved to London in 1835. The brother of Antoine Henri Petroz, Henri Petroz opened Paris’ first homeopathic pharmacy in 1833. The first Organon in French was by Baron Ernst George von Brunnow 1796 - 1845 in 1824. The first journal in the French language was Bibliotheque Homeopathique, introduced in Geneva in 1832. Jean Paul Tessier Senior introduced homeopathy to Paris hospitals in 1847.

The first UK homeopaths were all close colleagues of Samuel Hahnemann in Paris and they came to England specifically to set up homeopathic practice in the 1830s. They were Frederick Hervey Foster Quin, Paul Francois Curie, grandfather of the scientist Pierre Curie, William Leaf, a rich London Silk Merchant, and Thomas Roupell Everest.

Thomas Roupell Everest also published Heal the sick and cleanse the lepers as you preach the gospel: A sermon, preached in the Church of St. Augustine, Old Change, Cheapside, on Wednesday, April 9, 1851, in aid of the Hahnemann Hospital on Wed 9 April 1851, a sermon he had preached in London, delivered in favour of the said hospital, which was a homeopathic venture of Paul Francois Curie…

Frederick Hervey Foster Quin, William Leaf, Paul Francois Curie and Thomas Roupell Everest were part of the inner sanctum of Samuel Hahnemann’s proteges. They established practices in the UK and later free dispensaries for the poor and also several hospitals…

In addition to the Hahnemann Hospital at 39 Bloomsbury Square, William Leaf also organised a dispensary for the poor of the district near his Country House (opened in 1837 in Finsbury Circus… where Joseph Laurie and George Fearon were students of Paul Francois Curie) and where Paul Francois Curie treated numerous patients every Sunday. Paul Francois Curie also taught homeopath Joseph Kidd.

Harris Livermore Coulter page 81: Robert Fludd was the first person to record the isopathic treatment of tuberculosis in the 17th century. The second person to do so was homeopath Constantine Hering in 1830 in America. In the 1850s, homeopath Paul Francois Curie (grandfather of Pierre Curie) ‘undertook an investigation on the inoculation for tuberculosis’.

Born in Grand Charmont in 1799, Paul Francois Curie studied medicine in Paris under Francois Joseph Victor Broussais, Guillaume Dupuytren, Alexis Boyer, Pierre Augustin Beclard and Jacques Lisfranc. He entered military service in 1820 at the Picpus and Val de Grace Hospitals and became assistant surgeon to the 8th Regiment of Chausseurs. He was promoted to full surgeon in 1830 with the National Guards of Mulhausen.

In 1832, Paul Francois Curie converted to homeopathy and went to Paris where he performed research into homeopathy in the large hospitals in Paris. In 1835, he met William Leaf who persuaded him to move to London, where he had to learn English before he could practice.

In 1837, he worked in the Finsbury Circus Free Dispensary for the Poor, where he instructed Joseph Laurie and George Fearon. In 1839, he moved his practice to Ely Place in Holborn where he taught homeopathy to John Ozanne, William Henry Mayne, Samuel Thomas Partridge, Vienttinghoff, Francis Black and Thomas Engall.

In 1841, he moved to Brook Street, leaving the Poor Dispensaries fully up and running, he decided to found a hospital. William Leaf obtained a large house in Hanover Square and set this up as a hospital.

In 1843, a school of homeopathy was established, and the Annals of the Homeopathic Dispensary was published from 1840 to 1845, containing many of Paul Francois Curie’s clinical lectures. These lectures crossed the Atlantic to form a text book at the Philadelphia Homeopathic College.

Also in 1845, Paul Francois Curie went to Aberdeen to obtain a British MD from Kings College to conform to the new Medical Registration Bill. In 1850, the Hahnemann Hospital at 39 Bloomsbury Square was established, where Paul Francois Curie remained as a consultant until his death in 1853.

Unfortunately Curie caught typhus from a patient and died in 1853 and the Hahnemann Hospital at 39 Bloomsbury Square closed shortly afterwards. This led to the unification of the homeopathic medical profession.

from Diary of the Late John Epps; formerly a Lecturer in Materia Medica and Botany at the Hunterian School of Medicine, London, homeopath John Epps was a political, religious and medical radical, who was loosely associated with Frederick Hervey Foster Quin, and more closely with Paul Francois Curie, Harris F Dunsford, the co-founders of the radical and breakaway British Homeopathic Association, in direct opposition to the British Homeopathic Society. 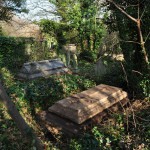 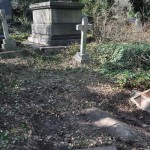 See the Friends of West Norwood Cemetery web site http://www.fownc.org/ with special thanks to Colin Fenn, the vice chairman of the Friends of West Norwood cemetery email 19.3.12 ‘… The cemetery was once known as the Millionaires’ Cemetery because of the wealthy and aspirational people of the Victorian era who ended up here. We recently discovered that Paul Curie is interred here, buried a few paces away from William Leaf. These are but two of dozens of notable medics and hospital founders buried here…’ And another email dated 27.3.12 ‘… The Friends were clearing scrub in the cemetery last weekend and so I took the opportunity to focus on the Leaf & Curie plots. You will see from the attached photo that William Leaf’s tomb – at the rear – is in good condition. Its a tall rough-hewn and ashlar granite sarcophagus with a deep brick vault below. Descendants are buried in there and in the plots to the left. There was also a marriage into the Tyas family and I notice there is a Tyas memorial in front of the main sarcophagus. Paul Curie’s tomb has not fared so well. In the centre foreground, just behind the ledger slab to Bonar Turnbull, we removed 4? of leaf mould to discover a broken up memorial or slab at the position where he should lie. It probably would have run the full length of the plot, about 6? long by 2? across, similar to the low gabled memorials to the right of it. You can see some of the remnants of the broken-up stone in the area of the plot…’

Paul Francois Curie wrote Specification of Paul Curie: Evaporating Sewage, &c., Practice of Homoeopathy, Domestic Homeopathy, Principles of homœopathy, Clinical Lectures on Homoeopathy, Verdict of Coroners’ Juries. The Case of the Late Mr. Cordwell, A Treatise on Cholera, English and Asiatic; with Directions for the … , and he translated The Manual of Homœopathic Medicine by Gottlieb Heinrich Georg Jahr.

Paul Francois Curie’s grandsons Pierre Curie and his brother Paul Jacques Curie invented the Piezoelectric Quartz Electrometer, which Marie Curie used to extract radium from pitchblende in 1896. Pierre Curie and Marie Curie had a long history of homeopathic research to base their experiments on.

In 1896 homeopathic physician Emile Grubbe was the first person to use radiation treatment on a cancer patient when he discovered fractionated radiotherapy. Grubbe was also the first to use lead as protection against x rays. The sad experiments of homeopath Emile Grubbe would have been well publicised in the press, homeopaths had been experimenting with Uranium as a treatment for diabetes since 1860 (Anon, The North American Journal of Homeopathy, Volume 10; on nitrate of uranium in diabetes, (American Medical Union, 1862). Page 384). Emile Grubbe also recommended x-ray for the treatment of acne and on Lupus Vulgaris. Emile Grubbe, in consultation with his colleagues at the Hahnemann Medical College of Chicago Joseph Puttee Cobb, R Ludman and J. E Gilman decided to try x ray to treat breast cancer. Emile Grubbe also tried x ray in the treatment of urinary calculi, cancer of the wrist, cancer of the uterus and delerium. Emile Grubbe was the originator of the Memorial Award of the Chicago Radioloical Society. Despite horrible disfigurement from his own experimentation, Emile Grubbe eventually had to give up lecturing after his body was made ’a testing laboratory’ for the poorly understood effects of x-ray.