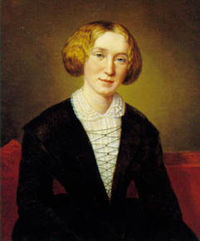 Mary Ann (Marian) Evans 1819 – 1880, better known by her pen name George Eliot, was an English novelist. She was one of the leading writers of the Victorian era. Her novels, largely set in provincial England, are well known for their realism and psychological perspicacity.

Her publisher and colleague was John Chapman.

The Rev. John Brown was the Baptist Minister in Northampton; and Uncle Harry was married to his sister, Aunt Jane - consequently I knew the Browns intimately and went to their home often; Mrs. Brown was a clever woman and was a friend of “George” Eliot’s - went to school with her and her great admirer.

Mrs. Brown had a great deal to do in forming my character. I was very fond of her and she influenced me greatly, but never made a Baptist of me. My father was a strong Tory and Churchman and I always liked church better than chapel - but went every Sunday a.m. to College St. Chapel where John Brown preached, and where my mother was buried. I met Charles Haddon Spurgeon at Mr. Brown’s though he did not appeal to me.

Arthur Crowden Clifton was a cousin of mine and lived in Northampton. He was the homeopathic doctor, and used to come in and see “Aunt Kate” (Grannie) and she being Allopath they used to have great discussions on medicine. However, Arthur Crowden Clifton made his mark, went on a trip to America representing the Homeopathic doctors of England, and was conferred the title of Doctor, he held the M.R.C.S.E. degree and was not an M.D. so Grannie had another pull at him…

Mary Ann Evans stayed at the house of John Chapman, the radical publisher whom she had met at Rosehill and who had printed her translation. John Chapman had recently bought the campaigning, left-wing journal The Westminster Review, and Evans became its assistant editor in 1858.

Although John Chapman was the named editor, it was Evans who did much of the work in running the journal for the next three years, contributing many essays and reviews…

Mary Ann Evans formed a number of embarrassing, unreciprocated emotional attachments, including that to her employer, the married John Chapman, and Herbert Spencer…

Mary Ann Evans also had a relationship with George Henry Lewes, a philosopher, literary and theatre critic, who eventually left his wife to live with her.

George Henry Lewes’s views on psychology, partly explained in the earlier volumes of the Problems, are more fully worked out in the last two (3rd series). He discussed the method of psychology with much insight. Against Auguste Comte and his followers he claimed a place for introspection in psychological research.