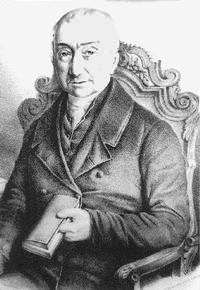 Johann Gottfried Rademacher 1772 - 1849 was a German orthodox physician who converted to homeopathy to become the modern father of organopathy.

Rademacher was a contemporary of Samuel Hahnemann.

James Compton Burnett was a great fan of Rademacher and organopathy.

Rademacher qualified as a doctor in Jena, and he intended to completely overthrow the system of medicine that was being practiced at that time. He was not alone.

Rademacher published his 1600-page Erfahrungsheillehre (Empiric Medical Practice) in 1841, giving birth to the practice of Organopathy. Rademacher based his work on his own empirical observations, which he supported on the writings of Theophrastus Bombast von Hohenheim (Paracelesus), the 16th-century Swiss alchemist/physician.

Many of Rademacher’s remedies were introduced to homeopathic practice, or saw homeopathic applications inspired by their organopathic uses, via James Compton Burnett…

Rademacher’s Organopathy - drawing on Paracelesus to rationally support his empirical observations - posited the physical organs as the seat of disease, often creating symptoms seen and felt elsewhere in the body “through sympathetic affections of the strangest nature”.

As with Samuel Hahnemann, Rademacher did not seek the nature of these diseases in the “invisible interior of the organism,” but rather identified them by similitude to their remedial substance - a Celandine liver disease, a Carduus Marianus liver disease, etc.

Remedies were selected on the basis of their affinity for the organ in which the disease was felt to reside, and differentiated further on the basis of the “genus” of the disease - a concept less well defined than Samuel Hahnemann’s totality of symptoms, and based on empiricism and considerations arcane to the practice. It is immediately apparent how such a system would entice the anatomist in James Compton Burnett…

By Ellen Kramer (MCPH, RSHom) The College of Practical Homeopathy:

Practical homeopaths may use herbs to enable the organs to rebalance and re-establish equilibrium to support normal and proper function.

Generally herbal tincture will act as a tonic or a food for the organs, and are best used as material substances…

When is it appropriate to use herbal tincture?

It can take up to three months for the liver to detox. e.g Dr Knapp ( a famous herbalist) treated goiters with Fucus. He put patient on Fucus Mother tincture for 3 months if it was small, for 6 months if medium size, and for 18 months if very large.

Herbal tinctures (have an alcohol ratio of one part to three or five parts alcohol which makes them less dilute with more of the material substance in them). A lot of homeopaths do not like using them as they think they are not as safe as Homeopathic Mother Tinctures.

They are however cheaper to buy and normally have more of the organic mineral content in them than theHomeopathic Mother Tinctures, and so can be more appropriate if you want to feed the organ. They are normally used by administering 7-15 drops of the herbal tincture 2 times a day in water.

Milkthistle was discovered in the 1800s by Johann Gottfried Rademacher, a German physician and scientist. Rademacher isolated the active ingredient from the hull of the tiny fruit (which was called Rademacher’s tincture).

He traced many digestive troubles to the liver and used Mariendistel with great success. Today, Milkthistle has gained acceptance as the most important herb for the liver.

However, others used organ or tissue extracts to treat conditions centred upon a particular organ or tissue. Constantine Hering suggesting this back in the 1840s, and Philip Griesselich’s Handbuch elaborated the use of hepatin (extract of liver), rabid liver (Dioscurides and Pliny recommended this as a cure for rabies 2000 years ago), pulmonin (extract of lung) and Leinin (extract of spleen).

Louis Pasteur copied Charles Edouard Brown Sequard, using injections of cerebral emulsion to treat insanity with no success. Similar attempts were undertaken in America, and in Vienna by Julius Wagner Jauregg. These techniques were abandoned as they are falsely based on poor philosophy.

Modern homeopaths today follow Rademacher’s techniques and use ordinary medicines to support weak or diseased organs, given most commonly in herbal tinctures or homeopathic Mother Tinctures.

Potentised homeopathic remedies of these substances are also given in some circumstances.

Homeopaths would only give extracts of diseased organs or tissues in potentised homeopathic remedies above Avogadro’s number for absolute safety.

Rademacher and Sheek were homeopathic publishers at 239 Arch Street Philadelphia in 1855.