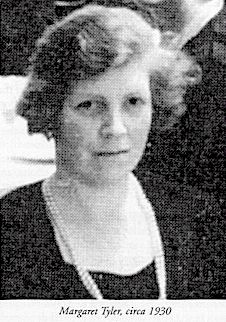 Henry Whatley Tyler, the father of Margaret Lucy Tyler, was interested in homeopathy and contributed large sums of money for the expansion of the London Homeopathic Hospital.

”When her father, the late Henry Whatley Tyler, gave the Tyler Wing to the London Homeopathic Hospital, he told her “I have done my part: now you must do yours.” [Margaret Lucy Tyler: An Appreciation John Weir, in Homeopathy 1943]

Margaret Lucy Tyler’s mother later consolidated this link as the ‘Sir Henry Tyler Scholarship’, a Trust Fund to send young doctors over to the USA for further training in homeopathy.

The advent of Kentian ideas can be said to have been almost solely due to Dr. Margaret Tyler. She induced her parents, who served on the committees of the London Homeopathic Hospital, to provide money for scholarships enabling doctors to study in Chicago under James Tyler Kent.

She qualified in medicine in 1903 at the age of 44 and served on the staff of the London Homeopathic Hospital until her death forty years later. She specialised in retarded children but her great contribution was teaching. She lectured, she ran a correspondence course, and edited a journal which could be used as a textbook.

But she is best known for her ’Homeopathic Drug Pictures’, which simplified the materia medica for students.

… in recognition of materia medica’s central importance that inspired a physician like Margaret Tyler to ”read a drug each night before retiring,”

On her return full of enthusiasm for the new teaching she published a pamphlet in which she criticized the prevailing orthodoxy.

This naturally gave rise to a good deal of resentment, but Dr Tyler was unrepentant and in 1907, in conjunction with her mother, Lady Tyler, she instituted a scholarship to send doctors to the USA.

Lady Tyler contributed a stained glass window for the Chapel at the London Homeopathic Hospital.

About 1907 her great concern was for the future supply of homeopathic physicians, as there was no definite post-graduate teaching, though much had been done by individuals. She was a great believer in going to the fountain-head, as she termed Samuel Hahnemann, and feared that much of the homeopathic practice was getting away from her ideal.

She then, with her mother, instituted the Sir Henry Tyler Scholarship fund (in memory of Margaret’s father,

Sir Henry Whatley Tyler) to help doctors go to the USA to study under Dr. James Tyler Kent, a keen Hahnemannian in practice.

Captain Sir Henry Whatley Tyler, 1827-1908 R.E., Assoc. Inst.C.E. was born in Mayfair, England, in 1827, and died in 1908. He became an Inspecting Officer for Railways in 1853, not only inspecting new railways and investigating accidents, but as a Civil Servant…

His expertise was called upon not only in the UK but also in various locations in Europe. In 1866 his inspection of the routes through France and Italy and report to the Postmaster General on their availablities, led to the adoption of Brindisi as the route for the Indian Mail.

In 1867 he investigated the water supply of the City of London following an outbreak of Cholera. Retiring from the Army (Royal Engineers), in 1868 he spent two leave periods building the first railway in Greece from Athens to Piraeus.

By 1871 he was promoted Chief Inspector of Railways, and his annual reports, published as Blue Books, formed internationally recognised text-books of great value. In 1875-76 he was a leading and enthusiastic member of the abortive Channel Tunnel Commission.

He was President of the Grand Trunk Railway of Canada

This created a stir and much controversy, but Dr. Tyler carried on with her efforts and many of the physicians of today studied under Dr. James Tyler Kent between 1908 and 1913.” [from Margaret Tyler’s Obituary, BHJ, 1942-1943, by Sir John Weir.

An early beneficiary was Sir John Weir, who soon after his return to England in 1909 was appointed by James Compton Burnett as Professor and Honorary Secretary of the British Homeopathic Society. Under the influence of Drs Tyler and John Weir in London and Robert Gibson Miller in Glasgow, Kentianism made rapid progress towards becoming the prevailing homeopathic orthodoxy in Britain.

The Hughesian Old Guard naturally resisted the new trend, but though they remained unconverted they were ageing, and by the end of the First World War opposition to Kentianism had all but ceased…

James Tyler Kent’s writings were now the authoritative source, but not the only source: Dr Tyler also tried her hand at the art of painting word-pictures of medicines and soon out-did her mentor in readability and verve. In her hands these “remedy pictures” became almost Dickensian.

We are here a world away from the austerity of densely packed narratives of provings in Hughes’s Cyclopaedia, let alone from the bare symptom lists in Hahnemann’s Materia Medica Pura. Even James Tyler Kent seems dry and restrained in comparison.

Although it is difficult to be certain, it seems likely that the concept of “constitutional prescribing” in the modern sense is largely due to Margaret Tyler and her associates…

But Margaret Tyler, Sir John Weir, Robert Gibson Miller, and other British homeopaths in the first half of the twentieth century ignored these warnings and made the quest for constitution the prime task of the homeopath.

The use of nosodes as treatment for miasms is now quite common. Margaret Tyler in England (a pupil of James Tyler Kent), and others since, have made frequent use of the isodes of vaccines (Diptherinum, Morbillinum, Varicellinum) to treat for past traumas…

The use of ascending potencies over a short period of time is not new, if not necessarily widely practised. Margaret Tyler was one to use common potencies (30, 200, 1M, 10M) over several days, or even only a few hours apart.

As Margaret Tyler wrote in her article ”How Not to Practice Homeopathy,” without the right philosophy you might as well stop practicing.

Tyler made several remedies ‘classic’, for example Tyler recommends Gelsemium for NBWS (never been well since) flu, where the patient is tired, languid, heavy. and Baptisia found effective by Margaret Tyler:

“in that year of very fatal ‘typhoid flu’ following the 1914-18 war - a woman dark, almost purple in the face and drowsy cured in a few hours after Baptisia”. Besotted look, delusions, stupor, confusion, brown tongue, foul breath, sepsis. Baptisia has the Arnica “sensations all over the body, as if bruised or beaten”. Useful in later stages of flu.