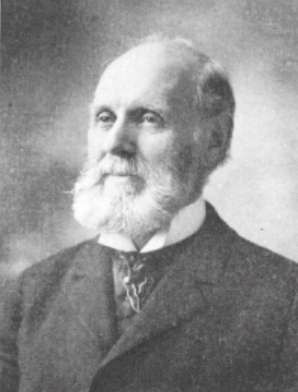 Reuben Ludlam 1831 - 1899 was an orthodox doctor who converted to homeopathy to become one of the founders of the Hahnemann Medical College of Chicago, where he was Dean and Chair of Physiology, Pathology, and Clinical Medicine, Physician in Charge of the Woman’s Department of the Scammon Hospital, President of the American Institute of Homeopathy, associate editor of the North American Homœopathic Quarterly, _ editor in charge of the obstetrical department of the _United States Medical and Surgical Journal_, editor of the _Chicago Homeopath_ and the _Clinique_. _

Reuben Ludlam of Chicago, Ills., was born in Camden, N. J., October 7th, 1831. He is the eldest son of Jacob W. Ludlum, M. D., who during a period of thirty years sustained a high reputation for probity and professional skill.

Under the guidance of his father, Reuben prepared himself to receive the full benefits of medical study in the University of Pennsylvania.

As a child, he accompanied his father in his daily round of visits and on his long drives and his only ambition, as he expressed it, was to become as great and useful a man as his father. Reuben attended the academy at Bridgeton, New Jersey, from which he was graduated with the highest honors. On leaving school, he began a systematic course of medical study under the supervision of his father and subsequently entered the University of Pennsylvania, from which he received his diploma in 1852.

At the close of his third course of lectures, he was graduated in that institution in March, 1852. In the following autumn he removed to Chicago, where, from that time, he has been so exclusively occupied by his duties, that in twenty years he has been absent from his post but twenty-five days.

Like so many of the young men of marked ability, he early espoused the cause of homœopathy, -giving in his adhesion to the system one year after his graduation.

Reuben had been educated in an allopathic school and he practiced allopathy, but the success of homeopathic physicians in the treatment of cholera so impressed him that he was forced to investigate its teachings and, being convinced of the truth of the new theory, he cast aside his old beliefs and became a homeopathic practitioner.

In 1853 Dr. Ludlam associated himself with Dr. David Sheppard Smith, and from that time on, he actively co-operated with every plan that was formed to advance the cause of homeopathy. In 1853, George E Shipman started the ”Chicago Homeopath” and a year later Dr. Ludlam, at the age of 23, became its editor.

When the Hahnemann Medical College of Chicago was organized in 1859 , he was elected to the chair of Physiology, Pathology, and Clinical Medicine. He filled this responsible position for four years to the entire satisfaction of the institution and the students. He was transferred to the Chair of Obstetrics and the Diseases of Women and Children, which he still holds.

Aside from qualifications in the minute and thorough acquaintance with his subject as a teacher, Dr. Ludlam is distinguished for the singular perspicuity of his thoughts, the ease with which he elucidates his points, and the force with which he impresses them on the minds of his students. His lectures are purely extemporaneous -no notes being before him- and are remarkable for their systematic and practical character.

Possessing all the ardor of a convert to homœopathy, his well balanced mind renders his views and opinions comprehensive, liberal, peaceful, and progressive.

During several years, Dr. Ludlam was an associate editor of the North American Homœopathic Quarterly, published in New York. For seven years he has been and still is in charge of the obstetrical department of the United States Medical and Surgical Journal, an able quarterly published in Chicago.

In March, 1863, he published the first medical work ever written and published in the North West, consisting of ”A Course of Clinical Lectures on Diphtheria,” which attained great popularity. His specialty in his profession is that of the diseases of women and children, in which he has made a reputation second to none. His private and consulting practice is almost unlimited. He has the charge of the woman’s department of the Scammon Hospital.

He has recently given to the public a work entitled, ”Clinical and Didactic Lectures on the Diseases of Women,” which is used in all the homœopathic colleges as a recognized authority both in this country and in Europe.

Besides having been editor of the Chicago Homeopath, Dr. Ludlam was associated editorially with the North American Journal of Homeopathy, the United States Medical and Surgical Journal and the Clinique.

For twenty-five years, from 1866 to 1891, he was Dean of Hahnemann Medical College of Chicago, presided at the meetings of its faculty and labored to his utmost for its success. Upon the death of Dr. David Sheppard Smith in 1891, Dr. Ludlam was elected president of the board of trustees, which position he occupied at the time of his death.

In 1868, he was appointed to the professional charge of the Homœopathic Infirmary for Women, in New York city ; and in 1870, was unanimously elected to the Chair of Obstetrics and Diseases of Women and Children in the New York Homœopathic Medical College. Both of these appointments, he was constrained to decline -finding it difficult to relinquish a field of labor in which he had won a commanding position.

In 1869, he was chosen President of the American Institute of Homœopathy, at its session in Boston, on which occasion he delivered the annual address. He subsequently served the society as its general Secretary. He was the first President of the Chicago Academy of Medicine ; and is an honorary member of several domestic and foreign learned societies.

When the Illinois State Board of Health was organized in 1877, Dr. Ludlam was called upon by Governor Shelby Moore Cullom to serve his state and for fifteen years he was an active member of that body.

During the year that followed the great fire of Chicago, be was the representative member of the homœopathic school in the medical board of the Chicago Relief and Aid Society, having in charge the health of sixty thousand sufferers by that terrible calamity. In this capacity he did much to allay the bitterness of partisanship, and to bring about a proper state of feeling among all classes and schools of physicians, who, however differing in their modes of practice, are all laboring for the common good.

In 1893, Ludlam referred Rose Lee, a woman with breast cancer to Emile Grubbe, who treated her with radiation therapy.

One of the best results that came to us from Major Edward H Mulford’s pioneering disposition was the visit to the West of Dr. Jacob W. Ludlam (father of the celebrated Dr. Reuben Ludlam, and the well-known Dr. Edward M. P. Ludlam (?), of Chicago’s homeopathic annals) who came from New Jersey to visit the Major in 1845, and was by him persuaded to make this his home.

The elder Dr. Ludlam and Major Edward H Mulford were of similar character and presence: tall, portly and dignified in form and bearing, with dark eyes, handsome and expressive countenances, strong intellects, sturdy common sense and great geniality of tone and manner.

These two friends and comrades were among the best specimens of what we are wont to call “gentlemen of the old school” that I have ever seen, and were in character and conduct, models worthy of study by those who aspire to the fine distinction of becoming gentlemen of the new.

Edwin Merritt Kellogg was treasurer of the American Institute of Homeopathy and President of the Homeopathic Mutual Life Assurance Company.

The records of this life assurance company show that homeopaths lost ten patients for every seventeen lost by allopathic practitioners, and by 1880 this company had issued over 11,000 policies.

Edwin Merritt Kellogg sent statistics from this company around the World and they show that for every one hundred deaths by allopathic doctors, homeopaths lost half that number.** **

In that same Philadelphia session, Dr. [Pemberton Dudley](../archives/2008/04/17/pemberton-dudley-and-homeopathy/) rose [to propose a resolution that a committee be appointed to consider the subject of a proposed](http://www.lmhint.net/his_usa.html) [International Homeopathic Congress](http://www.lmhint.net/congreso.html) to be held on the serendipitous occasion of the [American Centennial Celebration in Philadelphia in 1876](http://en.wikipedia.org/wiki/Centennial_Exposition).

Ludlam was twice married. His first wife, who was Anna M. Porter, died three years after their marriage. Several years later he married Miss Harriet V. Parvin, who, with his son, Reuben Ludlam, survived him.

On April 29, 1899, Dr. Ludlam was suddenly stricken while in the act of performing a hysterectomy for the removal of a fibroid tumor. He died almost immediately. Reuben Ludlum died of a heart attack whilst performing an operation. His son, also called Reuben grabbed the instrument from his father’s hand as he was carried away, finished the operation and saved the patient’s life, only to find when he emerged from the operating theatre, that his father had died.