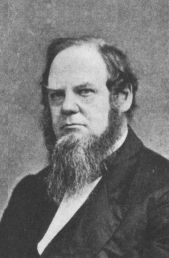 Walter Williamson 1811 - 1871 was an orthodox doctor who converted to homeopathy to become one of the founders and a Professor of the Homeopathic College of Pennsylvania, the first institution in the country to teach homeopathy.

Delaware County has the honor of being the birthplace of those veteran homeopathic practitioners, Drs. Walter Williamson, Richard Gardiner, and Gideon Humphrey, all espousing the cause at nearly the same time, and last, but not least, of being the residence of Dr. Alvan Edmond Small, at the time of his conversion to homeopathy.

Dr. Walter Williamson introduced homoeopathy into the county in the year 1836. He graduated at the University of Pennsylvania in 1833, and immediately settled in Marple.

He moved to Newtown in 1835, and in the spring of 1836 his attention was directed to the new system of medical practice. At the earliest opportunity he obtained all the books and pamphlets then published in the English language which had any bearing upon the subject, commenced the study of its doctrines, and began to practice it in the vicinity, where not even the name itself had ever been heard, except by one family, John Thomas, of Upper Providence.

He rapidly gained a large practice, but in 1839 he moved to Philadelphia, owing to seriously-impaired health. He was one of the founders of the Homeopathic College of Pennsylvania, the first institution in the country to teach this system of practice, and from 1848 until his death in 1879 he filled one of the professorships in the college. Dr. Williamson was born in Delaware County, July 4, 1811.

Constantine Hering served as President of the first American homeopathic medical school and as editor of its official journal. After financial failure of the initial efforts in Allentown, Constantine Hering and a small group of Philadelphia physicians including Drs. Jacob Jeanes and Walter Williamson, began efforts to recreate a homeopathic school in the Delaware Valley. The Pennsylvania legislature granted a charter on April 8, 1848 to an institution later to become Hahnemann Medical College.

Hahnemann Medical College was not the first homeopathic institution, The North American Academy in Allentown bears that distinction.

At this session a Bureau for the Augmentation and Improvement of the Materia Medica, which was named the Central Bureau, consisting of Drs. Constantine Hering, Jacob Jeanes, Charles Neidhard and Walter Williamson, of Philadelphia, and Dr. George, of Yellow Springs, Pa. Four of these gentlemen served faithfully upon this bureau for several years, Dr. Lingen giving place to Dr. James Kitchen, of Philadelphia, in 1845…

Dr. W. Williamson, of Philadelphia, presented a paper on Podophyllum peltatum, a remedy that he was proving. This was an entirely new contribution to pure pathogenesis and it was ordered to be read by the secretary and referred to the Central Bureau – the name adopted for the bureau appointed for the augmentation and improvement of the Materia Medica.

Thus far, the society had been managed without a constitution and by-laws; the necessity for them led to the appointment of a committee, consisting of Drs. John Franklin Gray and Benjamin F. Joslin of New York, Dr. Eliphalet Clark of Portland, MA, Dr. Walter Williamson of Philadelphia, and Dr. Abraham Howard Okie of Providence, RI, to whom was entrusted the framing and compiling of a suitable constitution and by-laws.

Drs. Williamson, Kirby, Edward Bayard, Eliphalet Clark and Edward Augustus Wild, who were appointed to frame a Constitution and By-Laws, made their report at the meeting on Wednesday evening, May 13. 1846, when each article and section composing it was fully discussed and afterward adopted. A motion was made and carried to appoint a committee of three to report an acceptable form of certificate, and Drs. Edward Augustus Wild, Williamson and Charles F Manchester were named…

Drs. Walter Williamson, of Philadelphia, Felix R. McManus, of Baltimore, J.M. Quinn, of New York, Eliphalet Clark of Portland, MA, and Samuel Gregg, of Boston, were announced as the Committee on Elections by the Chairman, S.R. Kirby, MD…

Walter Williamson of Philadelphia, Pa., was born in Newtown, Delaware county, Pa., January 4th, 1811. His ancestors were members of the Society of Friends, his father being the third lineal descendant of Daniel Williamson, who came to America with William Penn, in 1682.

He received a sound English education, and at an early age entered into mercantile pursuits. It soon became evident, however, that trade was not destined to engage his entire attention, for at this period, even the study of some of the branches collateral of medicine, were his favorite pursuits.

In his twentieth year he became the private pupil of the late William E. Horner, M. D., the distinguished Professor of Anatomy, and was entered as a student of medicine in the University of Pennsylvania ; from which institution he graduated in 1833.

He practiced allopathy, as he had been taught, for three years, and, in 1836, being convinced of the truth of the homœopathic law of cure -similia similibus curantur- he adopted that system of therapeutics.

In 1839, he removed to Philadelphia, and was soon engaged in an extensive and lucrative practice. In 1843, he published a treatise on the homœopathic treatment of the diseases of women and children, which has run through several editions, and remained for -a long time a text-book, until superseded by larger and more comprehensive works.

In 1844, he assisted in the organization of the American Institute of Homœopathy -the oldest national medical association in the United States- and was President of the association in 1848.

He was one of the founders of the Homœopathic Medical College of Pennsylvania, in 1848, and, for a number of years thereafter, satisfactorily filled the responsible position of a Professor within its halls. He assisted in educating a large number of the present practitioners of homœopathic medicine, by all of whom he was held in the highest esteem.

He was an indefatigable worker in the field of the Materia Medica, and made a number of additions to the list of medicines, which are highly prized in the profession. He was a constant contributor to the medical journals of his school, an active member of several medical societies, and, in fact, devoted much of his time and talents to the development and dissemination of homœopathy.

The rise, progress, and success of the homœopathic school of medical practice in this country is largely due to the labors of Dr. Williamson, who, by his talents and his well-known integrity, naturally wielded a very powerful influence.

Although originally of unusually vigorous constitution, and a man of most exemplary habits of life, yet incessant application to his multifarious pursuits, naturally impaired and finally broke down his health, and he died December 19th, I 870, most sincerely mourned by an affectionate family, and a very large circle of friends.