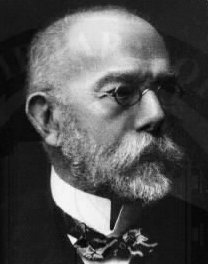 Robert Koch 1843 – 1910 was a German physician. He became famous for isolating Bacillus anthracis (1877), the tuberculosis bacillus (1882) and the vibrio cholera (1883) and for his development of Koch’s postulates.

He was awarded the Nobel Prize in Physiology or Medicine for his tuberculosis findings in 1905.

The claim that Robert Koch ‘borrowed’ his groundbreaking ideas from homeopathy is not new. It was made at the time by homeopaths who criticized him for taking certain parts of their method and then misapplying them, and by allopaths who viciously attacked him for ‘being a homeopath’, and Koch was condemned with outrage because of this ‘incredible humiliation’.

Harris Livermore Coulter page 36: In 1878, Robert Koch published his work on ‘pure cultures’ of bacteria, despite the pleomorphic variability noticed, but ignored in favour of the preferred theory of pure forms.

The death tolls from tuberculosis, diphtheria, typhus, cholera and anthrax were so shocking, and the pressure to find a solution for pressing, there was literally no time to concentrate on variations and practical solutions outweighed theoretically correct study.

Harris Livermore Coulter page 39: Rene Dubos complained that Koch and Louis Pasteur ‘over established’ the doctrine of specificity of disease causes, leading to blind acceptance of several generations of bacteriologists which has for many years discouraged the study of morphology, inheritance and variations within bacteria. The ‘disease’ was born.

Harris Livermore Coulter page 45: Since 1878, Koch and Louis Pasteur had been using the serial cultivation technique to separate ‘legitimate’ monomorphic bacteria from variant forms. However, Louis Pasteur continued to alter the conditions of cultivation to ‘attenuate’ the bacteria, thus blowing ’monomorphist’ doctrine off the map and proving ’pleomorphic’ reality.

Harris Livermore Coulter page 46: Koch followed reluctantly, as both men preached one theory, but practiced another.

If pleomorphism was actually real, then tuberculosis would not need to invade a host, as the conditions in the host could cause the bacteria to change from non pathogenic into pathogenic bacteria (pleomorphism). Koch did not believe that the tuberculosis bacilli did ‘attenuate’ (weaken), but he finally accepted Louis Pasteur’s ‘attenuation’ theory.

Harris Livermore Coulter page 48: “Paradoxically, when serial cultivation was employed to ‘purify’ a bacterial culture, it bolstered the monomorphist viewpoint, but when used for ‘attenuation’, it encouraged pleomorphism.”

Harris Livermore Coulter page 53: The accusation that Louis Pasteur ‘borrowed’ the concept of ‘attenuation’ from homeopathy was first made in 1880. Koch gloated over Louis Pasteur’s embarrassment and his refusal to publish his methods.

Harris Livermore Coulter page 74: European homeopathic journals had been published since 1832 all over Europe and America, and the success of homeopathy in contesting the infectious diseases of the day provoked a ferocious opposition from allopathic doctors who were helpless against the terrible death toll from these diseases.

Despite the vitriol and lies heaped on homeopathy, it became stronger and more popular as always. Allopaths have never understood that by heaping manure on homeopathy (see Harris Livermore Coulter page 75), they grow beautiful homeopathic roses. I doubt they ever will understand this rule!

Harris Livermore Coulter page 76: “It was in this atmosphere that Koch, at the 10th International Medical Congress in 1890, proclaimed his discovery of a ‘substance’ (later shown to be homeopathic) which exerted a ‘specific action on tuberculous processes without side effects on the host organism’“.

This was despite Koch’s 1884 ‘discovery’ of the causal agent of tuberculosis, which had not benefited a single patient. Nonetheless, great celebration resulted from Koch’s 1890 publication and the allopaths believed tuberculosis was ‘cured’.

Harris Livermore Coulter page 77: Like Louis Pasteur, Koch refused to divulge the origin or the composition of his ‘remedy’, though he did publicise where it could be purchased.

Koch then diluted his ‘stock solution’ to the equivalent of homeopathic dilution 3x, given in 0.001cc doses to reduce the ‘aggravations’.

Harris Livermore Coulter page 79: The publication of this data resulted in the Tuberkulinsturm, as allopaths reached ‘white heat’ and the price of tuberculin rose exponentially. Koch initially refused to yield the tuberculin patent to the state, bargaining himself a personal fortune.

Harris Livermore Coulter page 80: In the background of this feeding frenzy, the clinical results began to trickle in and koch’s patients began to die in increasing numbers. Rudolf Ludwig Karl Virchow published these trials, noting how the tuberculosis bacilli remained ‘unaffected’ as the sanotiriums were ‘completely emptied out by death’.

By 1891, Koch was forced to disclose his method for preparing his ‘stock solution’, ‘attenuated’ and ‘diluted’, the homeopathic skeleton was out of the cupboard.

Harris Livermore Coulter page 81: Robert Fludd was the first person to record the isopathic treatment of tuberculosis in the 17th century. The second person to do so was homeopath Constantine Hering in 1830 in America. In the 1850s, homeopath Paul Francois Curie (grandfather of Pierre Curie) ‘undertook and investigation on the inoculation for tuberculosis’.

From this point on, homeopaths routinely treated tuberculosis with remedies made from tuberculous sputum, ’attenuated’ and ’diluted’ and called tuberculinum.

Harris Livermore Coulter page 82: In 1890, homeopath James Compton Burnett published 54 cured cases of tuberculosis ’Cure of Consumption’, treated with a remedy prepared from tuberculous sputum called bacillinum, which included a critique of Koch’s ‘crude dilutions’, pointing out the ’aggravations’ Koch’s patients had suffered, plus an explanation of homeopathic philosophy of aggravations as part of the curative reaction of the Vital Force.

Harris Livermore Coulter page 83: Koch’s cat was out of the bag, as homeopaths all over Europe and America rushed to point out. The homeopaths explained that they would administer the remedy in high dilution, repeating it rarely. Koch’s method resembled allopathic drugging involving huge doses repeated very frequently, and ‘lethally dangerous’.

In 1891 Koch had to flee to Egypt to escape the scandal, relinquishing the honorarium from his ‘stock solution’ in favour of a donation to the building fund for the Institute for Infectious Diseases in Berlin, to which he would soon be appointed Director.

Harris Livermore Coulter page 84: The allopaths soon realised that Koch was practicing an approximation of homeopathy, and Koch was condemned with outrage because of this ‘incredible humiliation’, as Benjamin Ward Richardson declared in despair in 1891.

Harris Livermore Coulter page 85: Koch’s patients continued to die, ‘uncounted thousands’ died in this ‘major iatrogenic disaster’. Koch was forced to admit the paucity of his research and he died in the ‘conviction of failure’.