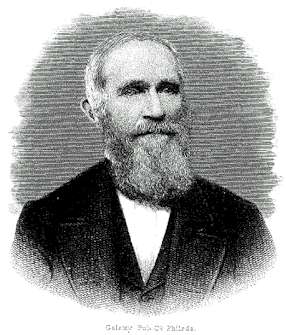 [**](http://homeoint.org/history/bio/k/kitchenj.htm)James Kitchen** 1800 - 1894 was an orthodox doctor who converted to homeopathy to become one of the first teachers of homeopathy in America.

He practiced homeopathy well into his 90th year.

Having passed through the usual primary school education, the subject of this sketch was graduated for the Collegiate department of the University of Pennsylvania, in 1819 with the degree of A. B. ; received that of Magister in 1822, and that of M. D. from the Medical Department the same year.

[James Kitchen of Philadelphia, Pa., was born in that city March 8th,

The September following he sailed for Europe, and continued his professional studies in the medical schools and hospitals of Paris, England, Scotland and Holland.

Immediately upon his return to Philadelphia, in June, 1824 (James Kitchen brought back notes from lectures by Rene Laennec on the use of the stethoscope which constitute the earliest mention of this instrument in America), he commenced practice, and was elected one of the physicians by the Southwal Dispensary, retaining the connection three years.

Until 1839, Dr. Kitchen was an allopathic practitioner. Up to that, time he suffered from a chronic affection of the liver, following a severe attack of dyspepsia contracted while a student. The best allopathy failed to give relief, and homœopathy having cured it entirely.

Dr. Kitchen, in 1839, began the homœopathic practice, and has continued in it with increasing confidence to this day. (James Kitchen sent some of his students to study under homeopath William Ashton Reed).

He has been honorably distinguished in professional literature. In 1828 he published a translation of M Bouilland’s ”Treatise on Rheumatism,” and in 1841 a translation of Gottlieb Heinrich Georg Jahr’s ”Homœopathic Pharmacy.”

He relinquished the Chair of Clinical Medicine in the Homœopathic College of Philadelphia, after one term, owing to the pressure of private business ; was placed in charge of the Lazaretto or Quarantine Station, by the Board of Health in 1831, when Dr. Lehmann was ill, and served as Port Physician from 1832 to 1836.

Since then a constantly increasing private practice has occupied his whole time, and given him that esteem, both as a man and a physician, that is the highest guerdon of merit. Such records are more honorable than either medals or decorations.

Dr. Josiah F Flagg, Boston, had the honor of being chosen unanimously as Chairman for the session, and the American Institute of Homeopathy started on the work for which it had been organized by appointing a Corresponding Committee to serve until the meeting of the society in 1845.

At this session a Bureau for the Augmentation and Improvement of the Materia Medica, which was named the Central Bureau, consisting of Drs. Constantine Hering, Jacob Jeanes, Charles Neidhard and Walter Williamson, of Philadelphia, and Dr. George, of Yellow Springs, Pa. Four of these gentlemen served faithfully upon this bureau for several years, Dr. Lingen giving place to Dr. James Kitchen, of Philadelphia, in 1845.

James Kitchen had experience of curing dysentery with homeopathy, and he wrote The High Dilutions and translated Gonorrhoea and Calcaria Carbonica by Croser, A New Homeopathic Pharmacopoeia and Posology, Opinions of French Homeopaths, and he wrote many articles for homeopathic journals and contributed to Jahr’s New Manual.