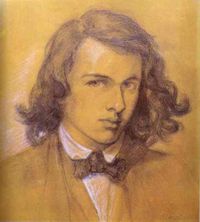 Dante Gabriel Rossetti 1838 - 1882 was an English poet, illustrator, painter and translator. He was the brother of poet Christina Rossetti, the critic William Michael Rossetti, and author Maria Francesca Rossetti, and was a founder of the Pre Raphaelite Brotherhood with John Everett Millais and William Holman Hunt.

Elizabeth Siddal (Lizzie), who became an important model for the Pre Raphaelite painters. They were married in 1860.

Toward the end of his life, Rossetti sank into a morbid state, darkened by his drug addiction to chloral and increasing mental instability, possibly worsened by his reaction to savage critical attacks on his disinterred (1869) poetry from the manuscript poems he had buried with his wife. He spent his last years as a withdrawn recluse.

On Easter Sunday, 1882, he died at the country house of a friend, where he had gone in yet another vain attempt to recover his health, which had been destroyed by chloral as his wife’s had been destroyed by laudanum. He is buried at Birchington-on-Sea, Kent, England. His grave is visited regularly by admirers of his life’s work and achievements and this can be seen by fresh flowers placed there regularly.

From the Rossetti Family Archive, we find this correspondence:

Dr. Wilkinson being an eminent Homeopathic Physician whom the Howitts had recommended Miss Siddal to consult.

On 11 May 1854, William Rossetti writes that Lizzie is receiving homeopathic treatment from James John Garth Wilkinson.

Lizzie seems upon the whole a little better, and James John Garth Wilkinson judges so from the long account of her symptoms which we sent.

Lizzie went this morning to see a Dr. Hale (another homeopath in Hastings), to whom Dr. James John Garth Wilkinson has recommended her, and who advises her to leave this part of Hastings as being liable to get too hot at this time of year, and to go nearer the sea. He thinks her state requires the very greatest care, and gave her some directions. She seems much the same, in fact, I think, though sometimes rather weaker or stronger.

I wrote yesterday, from her own lips, a most minute account of her state to James John Garth Wilkinson, and expect his reply. I cannot think that there is any need of her going into the Sussex Infirmary as proposed.

The Howitts had got her to see James John Garth Wilkinson (the distinguished Homœopathist and writer), who pronounced that there was curvature of the spine, and the case was an anxious one, but not at all hopeless.

I have already referred to the medical opinion obtained from Dr. James John Garth Wilkinson. Towards June 1855 another opinion was obtained from Dr. Acland of Oxford, to whom John Ruskin recommended her. The Doctor and others, including a lady of the Pusey family, received her with great attentions. He opined that her lungs were nearly right…

William Michael Rossetti was close friends with homeopath John Epps and his wife Ellen Elliott Epps, and James John Garth Wilkinson, who were all introduced to him by his friend William Bell Scott.

Christina Rossetti also became a friend to the Epps family. Her cousin Teodorico Rossetti was an advocate of homeopathy.