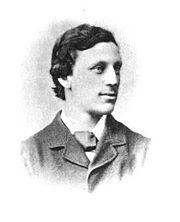 Arnold Toynbee 1852 - 1883 was an English economic historian also noted for his social commitment and desire to improve the living conditions of the working class.

http://en.wikipedia.org/wiki/Arnold_Toynbee Toynbee was born in London as the son of the physician Joseph Toynbee, a pioneering otolaryngologist in his time; the more famous universal historian Arnold Joseph Toynbee 1889-1975, with whom he is often confused, was his nephew.

Despite his untimely death at the age of 31, Arnold Toynbee was an extraordinary influence, and he coined the term ’Industrial Revolution‘.

Victorian reformers drew inspiration from many sources, but it was James Hinton who most deeply and explicitly articulated how the problems of slum life and the attractions of slumming were enmeshed in a complex matrix of sexual and social politics.

As slumming gathered momentum in the early 1880s, some claimed that society was beginning to reap the harvest of enlightened altruism James Hinton had sown in the years before his death in 1875.

James Hinton devoted his life to unraveling the mysterious sources of the desire to serve others as part of his larger project to liberate women and men from the body-denying and soul-withering values which he believed inhibited human self-development. He could find unity in his philosophy only by mixing “intimately with and becom[ing] the friend of the lowest and poorest class.”

Arnold Toynbee was a member [Robert A. Woods, Albert J. Kennedy, Albert Joseph Kennedy, The Settlement Horizon, (Transaction Publishers, 1922). Page 24] of the Tower Hamlets Radical Club with William Morris, Henry Solly, Frederick Nicholas Charrington, Henrietta and Samuel Barnett, Annie Wood Besant and many others, chased from tavern to tavern by the police until the club officially opened in 1874.

A crowded and enthusiastic meeting was held last night in the large Stepney Meeting Hall, in support of Annie Wood Besant’s candidature. The chair was occupied by Mr. Alfred Flint, of the Tower Hamlets Radical Association, and he was supported by Mr. John Hall, of Whitechapel, the election agent of Mr. Montagu, M.P., Herbert Burrows, William Clarke, and other well-known local Radicals.

The London clubs, in particular, continued to fight patronage. They tended to be more political (see Shipley 1983) and through their location in the metropolis are likely to have experienced more interference. There was much talk of patronage as ‘hateful’ comments Hall, the first historian of the movement.

The shifting pattern of club organization and the pressure to sideline patronage finally paid off in the early 1880s. In 1884 the (Club and Institute Union) CIU had 557 clubs in membership.

The membership began to insist on a directly elected central Council which properly represented the clubs in membership. Simon (1965:74) comments that the list of Council members for 1884 indicates how profound was the change. It includes, for example, representatives of the Tower Hamlets Radical Association – ‘one of the most advanced of working men’s clubs’.

By 1886 the Union was fully under democratic control and a new constitution was drawn up that effectively undermined a number positions of patronage (such as vice president).

Arnold Toynbee believed that economics and religion should be practical. He thought that underprivileged people needed education, religious faith, and a desire for self-improvement, just as much as they needed money.

He urged university students to settle in financially disadvantaged areas, where they could study local conditions and work to improve them.

Arnold Toynbee attended public schools in Blackheath and Woolwich. In 1873 he began to study political economy at Oxford, first at Pembroke College and from 1875 at Balliol College, where he went on to teach after his graduation in 1878.

His lectures on the history of the Industrial Revolution in 18th and 19th century Britain proved widely influential; in fact, Toynbee coined, or at least effectively popularised, the term ”Industrial Revolution” in the Anglophone world—in Germany and elsewhere it had been brought into circulation earlier by Friedrich Engels, also under the impression of the industrial changes in Britain.

Toynbee died at age 30 in 1883. His health had rapidly deteriorated, probably due to exhaustion by excessive work. He married Charlotte Atwood, who was 12 years his senior, and a cousin of Harold F. Davidson (who was a lifelong friend of Sarah Bernhardt and a friend of Annie Wood Besant), the famous rector of Stiffkey.

According to Arnold Toynbee, applying the historical method in economics would reveal how supposedly universal economic laws were in fact relative. For example, he argued that, in spite of commonly held beliefs, free trade was not generally advantageous in itself, but only under certain circumstances which should not be considered absolute.

Toynbee considered few laws as universally true, such as the law of diminishing returns. Therefore, there were no universal rules as to how strongly the state should interfere into the market, either; depending on the situation, different degrees of regulation could be appropriate.

Another idea Toynbee dismissed was to consider free competition as universally beneficial to economic and societal progress, especially as reflected in its apotheosis in Social Darwinism, which promotes laissez-faire capitalism. Toynbee suggests to distinguish between_“a struggle for mere existence and a struggle for a particular kind of existence.”_

From the very beginning of history, he argues, all human civilization was essentially designed to ”interfere with this brute struggle. We intend to modify the violence of the fight, and to prevent the weak being trampled under foot.”

Although economic competition does have its advantages, being the driving force behind technical progress, these were _“gained at the expense of an enormous waste of human life and labour, which might be avoided by regulation.” _

__For Toynbee, early industrial capitalism and the situation of the working class in it was not only a subject of ivory-tower studies (Arnold lived as closely as he could to workingmen’s situations, associating with them in their workingmen’s clubs and living in half furnished lodgings); he was actively involved in improving the living conditions of the proletariat.

He read for workers in large industrial centres and encouraged the creation of trade unions and co-operatives. A focal point of his commitment was the slum of Whitechapel in East London, where he helped to establish public libraries for the working class population. Toynbee also encouraged his students to offer free courses for working class audiences in their own neighbourhoods.

Inspired by Arnold Toynbee’s ideas, Samuel Augustus Barnett and Henrietta Barnett founded the first university settlement, which was named Toynbee Hall in his honour, in 1884, shortly after his death. A centre for social reform, Toynbee Hall was on Commercial Street, Whitechapel in the East End of London.

The concept was to bring upper and middle class students into lower class neighbourhoods, not only to provide education and social aid, but to actually live and work together with their inhabitants. This soon inspired a worldwide movement of university settlements.

The idea was to help members of the future elite understand the problems of British society; this was especially important at a time when class divisions were much stronger, social mobility was minimal, and the living conditions of the poor were completely unknown to many members of the upper class. Toynbee Hall attracted many students, especially from Wadham College and Balliol College where Toynbee had taught.

In 1916 the Arnold Toynbee House in New York was founded by a group of young adults who were part of the Stevenson Club at Madison House and with the help of philanthropist Rose Gruening. Eight years later, the settlement house was renamed Grand Street Settlement.

Arnold Toynbee suffered a severe concussion as a teenager aged 13 or 14 and suffered from recurring migraines and fragile health as a result. He became seriously ill after his second lecture and died as a result of the exertions involved. Arnold’s second lecture caused considerable hostility and resulted in his mental collapse, and possibly meningitis, which proved fatal.

Arnold Toynbee knew Lewis Carroll and William Archibald Spooner, the Warden of New College who was allegedly the model for the White Rabbit.

Arnold Toynbee wrote Lectures on the Industrial Revolution of the Eighteenth Century in England, **[Reminiscences and Letters of Joseph and Arnold Toynbee*](http://books.google.com/books?id=1lwJHQAACAAJ&dq=Arnold+Toynbee+1852+-+1883&lr=&ei=eqc9SK_QE6HayATm3u3LDw) edited by Gertrude Toynbee (Arnold’s sister and school friend of Samuel Augustus Barnett’s wife).

**Good Men and True: Biographies of Workers in the Fields of Beneficence by Alexander Hay Japp describes the close friendship of Arnold Toynbee and James Hinton.