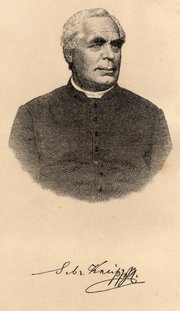 Sebastian Kneipp 1821 - 1879 was a German Catholic priest and is the source of a natural cure which is still operating today in German Kneipp-Kur. Kneipp was one of the founders of the Natural Hygiene Movement and for inventing Kneipp bread (Kneipbrød) and barefoot walking and many other natural healing techniques.

Kneipp was also an advocate of homeopathy.

A little over one hundred years ago an American newspaper surveyed its two million readers to determine the most recognizable people of the time. The most famous was the president of the United States, second most famous was the Chancellor of Germany, Bismarck, and third was Sebastian Kneipp, a priest in Bavaria.

Sebastian Kneipp had successfully treated thousands of people with such remedies as pure water, fresh air, exercise and herbs, and taught literally millions of others to utilize his techniques with his writings. His method was originally known as “Nature Cure.”

In the early nineteenth century, Sebastien Kneipp, a Bavarian priest and proponent of water healing, began treating his parishioners with cold water applications after he himself was cured of tuberculosis through the same methods. Kneipp wrote extensively on the subject, and opened a series of hydrotherapy clinics known as the Kneipp clinics, which are still in operation today.

Around the same time in Austria, Vincenz Priessnitz was treating patients with baths, packs, and showers of cold spring water. Vincenz Priessnitz also opened a spa that treated over 1,500 patients in its first year of operation, and became a model for physicians and other specialists to learn the techniques of hydrotherapy.

During his time in Bad Wörishofen, Kneipp was able to counsel many people. Tens of thousands came from all over the world to receive his healing advice.

Sebastian Kneipp was a Bavarian priest and one of the founders of the Naturopathic medicine movement. He is most commonly associated with the ”Kneipp Cure” form of hydrotherapy, a system of healing involving the application of water through various methods, temperatures and pressures.

In Norway he is mostly known for his bread recipe based on whole wheat. Kneipbrød (Kneipp Bread) is the most commonly eaten bread in Norway.

Although most commonly associated with the Natural Hygiene Movement, Kneipp was the proponent of an entire system of healing, which rested on five main tenets:

Sebastien Kneipp wrote My Water-Cure, About My Life: Autobiography, Thus Shalt Thou Live, my will: A Legacy To The Healthy And The Sick, Baby’s Kneipp Cure Or the Care of Children in Health and Disease.