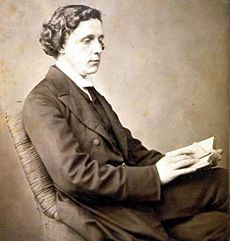 Charles Lutwidge Dodgson (Lewis Carroll) 1832 - 1898 was a convinced homeopath and carried his own remedy kit.

(Charles C. Lovett, Lewis Carroll among his books: a descriptive catalogue of the private library of Charles L. Dodgson, (McFarland, 2005). multiple pages. This book presents a complete catalogue of Dodgson’s personal library, with attention to every book the author is known to have owned or read: a vast array of academic interests including homeopathic medicine, spiritualism, astrology are included). 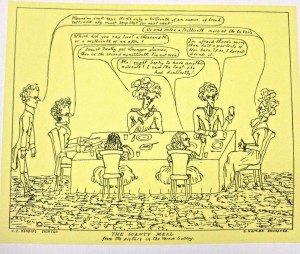 Here is a cartoon of a homeopathic dinner Lewis Carroll drew when he was a boy from The Rectory Umbrella!

Lewis Carroll was a close friend of George MacDonald:

George MacDonald happened to be acquainted with Robert Douglas Hale who, in turn, was friendly with James Hunt, Dodgson’s first speech therapist. This is probably how George MacDonald met Dodgson.

[The 1861 census finds Dodgson staying with Dr Hunt at Ore House near Hastings. Dr Hunt is described](http://64.233.183.104/search?q=cache:WK-cRf0C-OkJ:www.nationalarchives.gov.uk/documents/19may2005.pdf+James+Hunt+lewis+carroll&hl=en&ct=clnk&cd=7≷=uk&client=firefox-a) as a [Psellismolligist](http://news.bbc.co.uk/1/hi/uk/4560059.stm) – a [psellism](http://www.websters-online-dictionary.org/definition/PSELLISM) is defined by the [Oxford English Dictionary](http://www.oed.com/) as “any defect of enunciation, as stammering, lisping, etc., due either to nervous affection or to malformation of the vocal organs.”

…there’s plenty of evidence that medication and unusual states of consciousness exercised a profound fascination for Carroll, and he read about them voraciously.

His interest was spurred by his own delicate health - insomnia and frequent migraines - which he treated with homeopathic remedies, including many derived from psychoactive plants like aconite and belladonna.

He was greatly intrigued by the epileptic seizure of an Oxford student at which he was present, and visited St Bartholomew’s Hospital in London in order to witness chloroform anæsthesia.

Nevertheless, it seems that Alice’s mind expanding journeys owed little to the actual drug experiences of their author. Although Carroll - in everyday life, of course, the Reverend Charles Dodgson - was a moderate drinker and, to judge by his library, opposed to alcohol prohibition, he had a strong dislike of tobacco smoking and wrote sceptically in his letters about the pervasive presence in syrups and soothing tonics of powerful narcotics like opium - the

"medicine so dexterously, but ineffectually, concealed in the jam of our early childhood". In an era where few embarked on personal drug exploration without both robust health and a compelling reason, he remains a very unlikely self experimenter.

At about the age of 21, Charles Dodgson began a series of numbered diary volumes that he was to keep until his death. Volume 1 of this series was begun before October 1853 and the final volume, number 13, ended in December 1897, just a few weeks before his unexpected death from pneumonia.

Dodgson died leaving all of these 13 volumes behind him, probably more or less intact. However, at some time between his death and the centenary of his birth in 1932, four volumes and seven pages of text vanished and have not been seen since.

From the Lewis Carroll Society web site: see the Yahoo Discussion Group Although no longer active this was the busiest Carroll related discussion group on the web for several years and its archive is still active. There was a mixture of contributors with some real experts amongst them…

30.7.08 PLEASE NOTE THE LEWIS CARROLL Yahoo Discussion Group IS NOW BACK UP AND RUNNING AGAIN!

In fact, I cannot recall any mention of his taking ANY medicines, and it is surely relevant that he was a convinced homeopath and had a homeopathic medical kit which he took with him when he traveled.

Lewis Carroll Among His Books: A Descriptive Catalogue of the Private Library of Charles Lutwidge Dodgson presents a complete catalogue of Dodgson’s personal library, with attention to every book the author is known to have owned or read: a vast array of academic interests including homeopathic medicine, spiritualism, astrology, evolution, women’s rights, children’s literature, linguistics, theology, eugenics, and many others.

Entries alphabetized by title describe each book, its edition, its contents, its importance, and the relevance it might have had to Dodgson. The library not only provides a plethora of fodder for further study on the man, but would also aid research into the late Victorian world, a time of unprecedented investigation, experimentation, invention, and imagination.

His eagerness to meet famous people of his time, and his assiduous attempts to track them down and meet them through letters of introduction provided by his growing number of artistic and literary friends, tends to counter the suggestions of some biographers that Dodgson was a shy man.

His diary tells a different story. Taking photographs of important people was, without doubt, one of his main objectives. He also enjoyed conversation and discussion with the literary people he admired.

His most famous writings are Alice’s Adventures in Wonderland and its sequel Through the Looking-Glass as well as the poems ”The Hunting of the Snark” and ”Jabberwocky”, all considered to be within the genre of literary nonsense.

His facility at word play, logic, and fantasy has delighted audiences ranging from children to the literary elite, and beyond this his work has become embedded deeply in modern culture, directly influencing many artists…

He left Rugby School at the end of 1849 and, after an interval that remains unexplained, went on in January 1851 to Oxford, attending his father’s old college, Christ Church. He had only been at Oxford two days when he received a summons home. His mother had died of “inflammation of the brain” — perhaps meningitis or a stroke — at the age of forty-seven.

His early academic career veered between high-octane promise and irresistible distraction. He may not always have worked hard, but he was exceptionally gifted and achievement came easily to him. In 1852 he received a first in Honour Moderations, and shortly after he was nominated to a Studentship, by his father’s old friend Canon Edward Pusey.

However, a little later he failed an important scholarship through his self-confessed inability to apply himself to study. Even so, his talent as a mathematician won him the Christ Church Mathematical Lectureship, which he continued to hold for the next twenty-six years.

The income was good, but the work bored him. Many of his pupils were older and richer than he was, and almost all of them were uninterested. However, despite early unhappiness, Dodgson was to remain at Christ Church, in various capacities, until his death…

The young adult Charles Dodgson was about six feet tall, slender and handsome, with curling brown hair and blue or grey eyes (depending on the account). He was described in later life as somewhat asymmetrical, and as carrying himself rather stiffly and awkwardly, though this may be on account of a knee injury sustained in middle age.

As a very young child, he suffered a fever that left him deaf in one ear. At the age of seventeen, he suffered a severe attack of whooping cough, which was probably responsible for his chronically weak chest in later life.

Another defect he carried into adulthood was what he referred to as his “hesitation”, a stammer he acquired in early childhood and which plagued him throughout his life…

In his diary for the year 1880 Dodgson recorded experiencing his first episode of migraine with aura, describing very accurately the process of ‘moving fortifications’ that are a manifestation of the aura stage of the syndrome.

Given this manifestation, it’s possible that he chronically experienced the more common form of migraine, consisting simply of headache and nausea (Today, that Carroll was an epileptic is no secret, and no biographer need dig too far to find this information. It is easily found in journals and personal correspondence and in the notes of his doctors, two of whom diagnosed him.)

Although Dodgson’s stammer troubled him, it was never so debilitating that it prevented him from applying his other personal qualities to do well in society.

At a time when people commonly devised their own amusements and when singing and recitation were required social skills, the young Dodgson was well-equipped to be an engaging entertainer. He could sing tolerably well and was not afraid to do so before an audience. He was adept at mimicry and storytelling, and was, reputedly, quite good at charades.

Dodgson was also quite socially ambitious and anxious to make his mark on the world as a writer or an artist. In the interim between his early published writing and the success of the Alice books, he began to move in the Pre-Raphaelite social circle.

His scholastic career may well have been intended as something of a stop-gap on the way to other more exciting achievements. He first met John Ruskin in 1857 and became friendly with him. He developed a close relationship with Dante Gabriel Rossetti and his family, and also knew William Holman Hunt, John Everett Millais, and Arthur Hughes among other artists.

Before this, the family of friend and mentor George MacDonald read Dodgson’s incomplete manuscript, and the enthusiasm of the MacDonald children encouraged Dodgson to seek publication. In 1863, he had taken the unfinished manuscript to Macmillan the publisher, who liked it immediately. After the possible alternative titles Alice Among the Fairies and Alice’s Golden Hour were rejected, the work was finally published as Alice’s Adventures in Wonderland in 1865 under the Lewis Carroll pen name, which Dodgson had first used some nine years earlier. The illustrations this time were by Sir John Tenniel…

In 1856, Dodgson took up the new art form of photography, first under the influence of his uncle Skeffington Lutwidge, and later his Oxford friend Reginald Southey.

He soon excelled at the art and became a well-known gentleman-photographer, and he seems even to have toyed with the idea of making a living out of it in his very early years…

He also found photography to be a useful entrée into higher social circles. During the most productive part of his career, he made portraits of notable sitters such as John Everett Millais, Ellen Terry, Dante Gabriel Rossetti, Julia Margaret Cameron, Michael Faraday and Alfred Lord Tennyson.

Dodgson abruptly ceased to photograph in 1880. Over 24 years, he had completely mastered the medium, set up his own studio on the roof of Tom Quad, and created around 3,000 images. Fewer than 1,000 have survived time and deliberate destruction. His reasons for abandoning photography remain uncertain.

With the advent of Modernism tastes changed, and his photography was forgotten from around 1920 until the 1960s. He is now considered by many to be one of the very best Victorian photographers, and is certainly the one who has had the most influence on modern art photographers.

The Lewis Carroll diaries and Society is here.