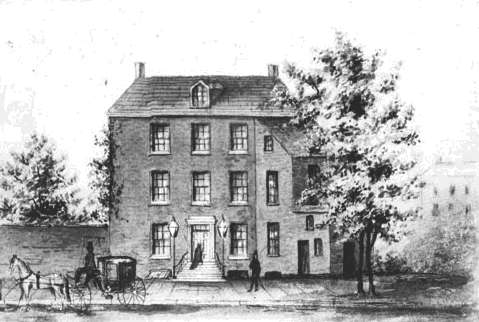 Odelia Blinn - 1880 (1894) - 1902 (died aged 60) (at age 68) (at age 80) was a pioneer among the women physicians of Chicago, a graduate of the homeopathic Woman’s Medical College in Philadelphia, a publisher and Medical Research correspondent, and a founder member of the Woman’s Christian Temperance Movement, alongside homeopath Alice Bunker Stockham and homeopathic supporters Sarah Hackett Stevenson, Mary Weeks Burnett and Florence Hunt.

Odelia Blinn spoke out strongly on the issues of the day. She was the first advocate for free public baths, about the great need of Chicago’s tenement children for some fresh-air-work, that overwork, which is a characteristic of the people of this country, was a most frequent cause of intemperance, and at some length on the subject of prostitution:

Odelia Blinn recalled the hundreds of women who had asked her for abortions. “The vast majority,” she observed, “were married women,” who sought abortions because of their husbands.

The doctor urged a single standard of sexuality and teaching men, like women, chastity.

"Has it ever occurred to [_The Times_](http://www.nytimes.com/) to investigate what men are doing while women are committing infanticide?" demanded Dr. Blinn.

The paper should investigate prostitution, she suggested; then the other sex would “feel the blow” of being publicly charged with immorality…

Odelia Blinn reported in a letter to The Times that in one year more than three hundred women had asked her for an abortion.

Degree of Doctor of Medicine was conferred by the *President Thomas Morris Perot on the following ladies: Odelia Blinn, Massachusetts…

I have used your Three Chlorides extensively in typhoid fever, the many exasperating cases of La Grippe, and find them very beneficial. …

*Thomas Morris Perot, merchant, born in Philadelphia, 8 May, 1828. He is the grandson of Elliston Perot, a noted Philadelphia merchant, and a descendant of Anthony Morris.

He early entered the retail drug business, subsequently was graduated at the Philadelphia College of Pharmacy, and in 1850 established himself in business as a wholesale druggist and manufacturing chemist, in which he has acquired wealth; but he is more widely known for his philanthropic works.

Since 1861 he has been the President of the Mercantile Library Company of Philadelphia, and under his administration its library of 22,000 volumes has grown to 160,000.

Mr. Perot bore an active part in founding the Woman’s Medical College in Philadelphia, the first institution of the kind in the world, and has been for many years its President.

Since his youth he has been connected with various charitable institutions, and he is now in the directorship of many such in Philadelphia. He has been active in the struggle for reform in municipal affairs, was one of the organizers of the first Citizens’ reform association, and became one of the original members of the Committee of 100.

The purpose of the Woman’s Christian Temperance Union is to combat the influence of alcohol on families and society.

Frances Willard, a noted feminist, was its second president. They were inspired by the Greek writer Xenophon who defined temperance as “moderation in all things healthful; total abstinence from all things harmful.”

The WCTU perceived alcoholism as a consequence of larger social problems rather than as a personal weakness or failing. Thus the WCTU was very interested in a number of social reform issues including: labor, prostitution, public health, sanitation and international peace.

As the movement grew in numbers and strength, members of the WCTU also focused on suffrage. The WCTU was instrumental in organizing women’s suffrage leaders and in helping more women become involved in American politics.

Frances Willard pushed for the “Home Protection” ballot, arguing that women, being the superior sex morally, needed the vote in order to act as “citizen-mothers” and protect their homes and cure society’s ills.

At a time when suffragists still alienated most American women, who viewed them as radicals, the WCTU offered a more traditionally feminine and appropriate organization for women to join.

Suffragists who emerged out of the WCTU used constitutional arguments to support their bid for enfranchisement and cited the Fourteenth Amendment. They claimed that American adult women had the right to vote because they were individuals and were thus entitled to enjoy all the rights of an American individual.

By making this argument, suffragists were perceived as less threatening to social order, appealed to American pride and were successful in presenting their message of extending voting rights to all American adults.

The WCTU created a significant response throughout the United States. In 1878, Matilda Bradley Carse became the president of the Chicago branch. During her time as president, Carse founded many charities and managed to raise approximately $10,000 a year to support them.

The WCTU also formed in Canada in 1873, in Ontario. In 1885 Letitia Youmans founded a nationwide organization which was to become the leading women’s society in Canada’s temperance movement.

An Australian arm commenced operation in 1882, it was important in both the temperance and women’s suffrage movements.

In 1885, WCTU missionary Mary Greenleaf Clement Leavitt went on a tour of New Zealand and helped establish WCTU branches there. Having turned down the offer to become the first president of the WCTU, Leavitt went on to be named Honorary President in 1891 in Boston.

Led by Kate Sheppard from 1887, the New Zealand WCTU was a major force behind the campaign for women’s suffrage. This resulted in New Zealand women being granted universal suffrage in 1893.

In addition to campaigning against alcohol, the WCTU addressed social ills stemming from drunkenness and domestic violence. It also campaigned for reforms that would improve the status of women in society, such as the right to vote.

The WCTU was a major force in Prohibition-and was also influential in creating laws banning prostitution and recreational drugs in the United States.

Although the WCTU had chapters throughout North America and had hundreds of thousands of members, it did not initially accept Catholic, Jewish, or African-American women, or women who had not been born in North America. Today that is no longer the case. In fact, today men may also join the organization as honorary members.

In contrast to the WCTU’s stated aims, not all large-scale Christian groups and movements believe the consumption of alcohol to be inconsistent with practice of Christianity (see Christianity and alcohol).