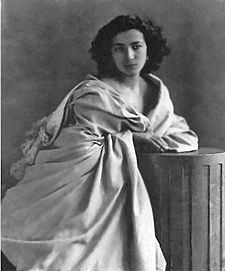 Sarah Bernhardt 1844 – 1923 was a French stage actress, and has often been referred to as “the most famous actress in the history of the world”.

Sarah Bernhardt insisted on homeopathic treatment for herself and for her cast. She carried her own homeopathic remedy kit, as described by James William Ward in his lecture on homeopathy in 1937, and it is of great interest that her remedy kit contained such high potency remedies, 1m and CM, which required highly specialised prescribing.

Sarah Bernhardt was also a patient of Emmanuel de Marney Baruch (?-?), a homeopathic Physician to the famous, who she consulted via cable from Paris (Neil Gould, Victor Herbert: A Theatrical Life, (Fordham Univ Press, 1 Aug 2009). Page 509).

Bernhardt made her fame on the stages of Europe in the 1870s, and was soon in demand in Europe and the United States. She developed a reputation as a serious dramatic actress, earning the nickname “The Divine Sarah.”

Sarah Bernhardt is buried in Pere Lachaise Cemetary in France, as is Samuel Hahnemann.

Sarah was a friend of Thomas Alva Edison who believed that mortals sleep too much eat many times more than they should, famously said:

”The doctor of the future will give no medication, but will interest his patients in the care of the human frame, diet and in the cause and prevention of disease.”

Sarah was also a close friend of Victor Hugo, whose mistress Juliette Drouet was an ardent fan of homeopathy (she consulted Paul Ferdinand Gachet).

Sarah reputedly had an affair with Edward VII when he was Prince of Wales, and the British Monarchy are still famous advocates of homeopathy.

Sarah was also a friend of Gustave Doré who illustrated Edgar Allan Poe’s ”The Raven“.

In 1905, while performing in Victorien Sardou’s La Tosca in Rio de Janeiro, Bernhardt injured her right knee during the final scene which required her to leap from a high wall. The leg never healed properly.

By 1915 gangrene had set in and her entire right leg was amputated, confining her to a wheelchair for several months.

Bernhardt reportedly refused a $10,000 offer by a showman to display her amputated leg as a medical curiosity (while P T Barnum is usually cited as the one to have made the offer, he had been dead since 1891).

Nonetheless, she continued her career, and contrary to belief, without the use of a wooden prosthetic limb (she tried using one, but didn’t like it).

She carried out a successful tour of America in 1915, and on returning to France she played in her own productions almost continuously until her death. Her later successes included Daniel (1920), La Gloire (1921), and Régine Armand (1922).

Her physical condition confined her practically to immobility on the stage, but the charm of her voice, which had altered little with age, ensured her triumphs.