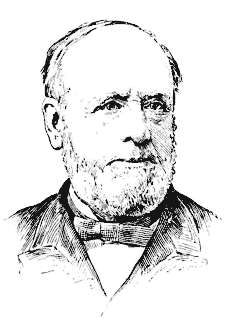 Jonathan Young Scammon 1812 - 1890 was an early settler in Chicago, Illinois, arriving in the city in 1835. He went on to become politically important as a lawyer, banker, and newspaper publisher.

Jonathan was also a supporter of homeopathy.

Eliakim Scammon was Brigadier General and James A Garfield ’s commanding officer in the 23rd Ohio Regiment. Eliakim Scammon was also Brigadier General and Rutherford B Hayes commanding officer in the 23rd Ohio Regiment. His brother Jonathan Young Scammon instituted Chicago’s Swedenborgian Church of the New Jerusalem (based on the works of Emanuel Swedenborg), and introduced homeopathic medicine to the Midwestern city through a new hospital. Jonathan donated ground for the Hahnemann homeopathic hospital.

During the early years of its history, at the present time and indeed during the whole period of its existence, Hahnemann Medical College has been fortunate in having as its trustees gentlemen of education, of social prominence and of wealth. Without the influence of, these gentlemen the rapid advancement of our institution would have been impossible.

Looking into the past history of Chicago it would indeed be difficult to select a stronger list of names than Norman B. Judd, J. P. Doggett, Temple S Hoyne, Jonathan Young Scammon, Benjamin Lombard, (Judge) Van H. Higgins, Edson Keith, E. H. Sheldon and Henry M. Smith, all of whom served upon our board.

Jonathan Young Scammon was a “strong Union man” and longtime friend in Illinois of Abraham Lincoln. Starting out there as a lawyer, Jonathan had founded the first railroad west of Lake Michigan, established Chicago’s first bank and laid the groundwork for its public school system, and helped start the Chicago American newspaper.

As the first President of the Chicago Astronomical Society, he built the Dearborn Observatory - which had the largest refracting telescope in the world - and he was also among the founders of the Chicago Academy of Science.

Jonathan instituted Chicago’s Swedenborgian Church of the New Jerusalem, and introduced homeopathic medicine to the Midwestern city through a new hospital.

Jonathan Young Scammon lawyer, born in Whitefield, Maine, 27 July, 1812. He studied at Waterville college (now Colby university), from which he received the degree of EL. D. in 1869, studied law in Hallowell, Maine, was admitted to the bar, and removed in 1835 to Chicago, where he began the practice of his profession.

He prepared a new edition of the laws of Illinois (”Gale’s Statutes”), was appointed reporter of the supreme court, and published “Seammon’s Reports” (4 vols., 1832-‘43).

He associated Ezra B. McCagg with him in 1847, and subsequently Samuel W. Fuller, in the firm of Scammon, McCagg, and Fuller. He took an important part in pioneer enterprises, was one of the main organizers and directors of the first railroad west of Lake Michigan, the Galena and Chicago (now the Northwestern), laid the foundation of the first successful public-school system in Chicago, and actively identified himself with many societies.

He was one of the founders of the Chicago Astronomical Society and its first President, and built and maintained at his own expense for many years Dearborn Observatory (The structure was named the “Dearborn Observatory” in honor of Mary Ann Haven Dearborn, the deceased wife of Jonathan Young Scammon, principal benefactor of the project), in which was placed the first grand refractor that was manufactured by Alvan Clark and Sons, of Cambridge, Massachusetts. The observatory cost $30,000.

Jonathan acquired wealth, most of which was lost in the great fire of 1871 and the panic of 1873, and he was at the head of several large and successful financial institutions.

He was a Swedenborgian, the first of that belief in Chicago, instituted the Chicago Society of the New Jerusalem and the Illinois association of that church, and was for ten years Vice-President of the general convention of his denomination in the United States.

He was the first lawman to introduce the homoeopathic system of medicine in Chicago, and founded the Hahnemann Hospital, of which and the Hahnemann Medical College he has been for many years a trustee.

Many acts of the legislature have originated with him, especially those reforming the circulating medium and driving out of circulation the depreciated currency that inundated Illinois and the northwest.

He has been officially connected with the city, county, and state government, and a member of the legislature, and of the Republican national conventions of 1864 and 1872. Mr. Scammon has contributed largely to the periodical press.

Scammon was born in Whitefield, Maine. He came to Chicago when he was twenty-three. An attorney and a Whig, upon arriving in the city, he entered a legal partnership with Buckner Stith Morris, who was himself recently arrived from Kentucky. Their partnership lasted less than a year before Morris left the practice. In 1843, he served as the court reporter for the Illinois Supreme Court.

In 1844, Scammon founded the city’s first newspaper, the Chicago Journal, a Whig-leaning newspaper that eventually became a Republican newspaper. Several years later, in 1861, Scammon sued the Democratic Chicago Democrat for libel after publisher John Wentworth published a cartoon which depicted Scammon as a wildcat banker. Scammon dropped the quarter million dollar suit only after Wentworth closed his paper, giving the subscription list to the Chicago Tribune.

Along with William Butler Ogden, he built the first railroad from Chicago in 1848, the Galena and Chicago Union Railroad, which ran from Chicago to a point ten miles west of town. When Eastern financiers refused to support the railroad, Ogden and Scammon raised the money by riding on horseback along the proposed route and taking donations from the farmers he passed.

Branching out, in 1851, Scammon founded the Marine Bank. He served as President of the Chicago Board of Education.

He helped create Oak Woods Cemetery in 1854 and was the cemetery’s fiurst president. In 1856, a group of men meeting in Scammon’s law offices created the Chicago Historical Society.

Scammon was apparently active in the Underground Railroad, although he never publicly admitted as such. When he was accused of working to help slaves escape from law officers, he was asked what he would do if called upon to be part of a posse to capture fugitive slaves. Scammon replied,

"I would certainly obey the summons, but I should probably stub my toe and fall down before I reached him."

In 1863, when the Chicago Astronomical Society determined to build an observatory affiliated with the University of Chicago, Scammon offered to pay for the construction of the observatory tower and dome as long as the observatory was named after his wife, Mary Ann Haven Dearborn.

The group took him up on it and named the building the Dearborn Observatory. Scammon also paid the director’s salary until he hit financial difficulties following the Great Chicago Fire in 1871.

In 1870, he donated the land and the buildings for the Scammon Hospital, which was renamed following the Fire to the Hahnemann Hospital.