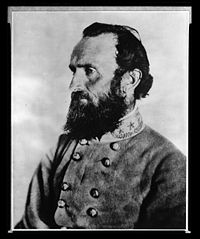 Thomas Jonathan “Stonewall” Jackson 1824 – 1863 was a Confederate general during the American Civil War, and probably the most revered Confederate commander after General Robert Edward Lee.

A fellow member of the faculty was Major Thomas J. Jackson, for whom Dr. *Robert Lewis Madison served as personal physician… In 1859, he was elected by the Board of Virginia Military Institute as the Mercer Professor of Animal and Vegetable Physiology Applied to Agriculture. Soon after, he was also appointed surgeon of the Institute.

In the spring of 1851, Jackson accepted a newly created teaching position at the Virginia Military Institute (VMI), in Lexington, Virginia. He became Professor of Natural and Experimental Philosophy and Instructor of Artillery. Jackson’s teachings are still used at VMI today because they are military essentials that are timeless, to wit: discipline, mobility, assessing the enemy’s strength and intentions while attempting to conceal your own, and the efficiency of artillery combined with an infantry assault.

The attitude to hydrotherapy and water cure in the South before the Civil war was quite different than in the North, and many allopathic physicians mixed the various therapies on offer without any qualm, for example:

Seth Rogers, Surgeon of the First South Carolina Afterward the Thirty-third U.S.C.T.1862-1863 (studied under Joel Shew who supported homeopathy) (commanded by Thomas Wentworth Higginson) from whose letters the following extracts are made, was one of the early practitioners of “water-cure” in America. He conducted a water cure establishment in Worcester, Mass., for many years. Afterward, he practiced medicine as a regular physician and belonged to the Mass., Medical Society.

Stonewall Jackson was a great believer in hydrotherapy (which is NOT homeopathy) and his surgeon Hunter McGuire saw no harm in this. Samuel B Morrison (his brother in law) also attended Stonewall Jackson.

It is not generally known that Stonewall Jackson practiced astrology. Col. J. W. Revere in “Keel and Saddle” (Boston, 1872) tells of meeting Jackson in 1852 on a Mississippi steamer and talking with him on the subject. Some months later, Revere received a letter from Jackson enclosing his (Revere’s) horoscope.

There was a “culmination of the malign aspect during the first days of May, 1863—both will be exposed to a common danger at the time indicated.” At the battle of Chancellorsville, May 9, 1863, Revere saw Jackson mortally wounded!

*In 1867, Robert Lewis Madison sold his house to Barnas Sears (who replaced Horace Mann as Secretary of the Massachusetts Board of Education and President of Brown University), a distinguished educator who had come to Staunton to administer the Peabody Education Fund (the Peabody Family were Boston Brahmins and also a family of homeopaths and homeopathic supporters).