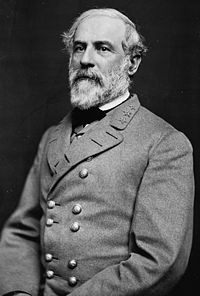 Robert Edward Lee 1807 - 1870 was a career United States Army officer, an engineer, and the most celebrated general of the Confederate forces during the American Civil War.

Lee was also a supporter of homeopathy.

These were not happy years for Lee, as he did not like to be away from his family for long periods of time, especially as his wife was becoming increasingly ill. Lee came home to see her as often as he could. Robert’s wife Mary Anna Randolph Custis Lee** **was treated by homeopath Alfred Hughes (and Eliza Clark Hughes, Alfred’s sister), (who were intimate friends of Robert E Lee and his wife).

When Lieutenant J.E.B. Stuart found Colonel Robert E. Lee at the Stabler-Leadbeater Apothecary Shop (a homeopathic pharmacy) on Oct. 17, 1859, he ordered Lee to suppress the insurrection of John Brown at Harper’s Ferry.

Since Lee’s stroke resulted in aphasia, last words may have been impossible. Lee was treated homeopathically for this illness.

In his final illness Robert E Lee was treated by Howard Thornton Barton (a suitor of Robert E Lee’s daughter Mildred) and *Robert Lewis Madison. Many of the medications prescribed were probably homeopathic…

Some of the medications on the list are striking, such as the administration of turpentine (a paint thinner) and strychnine (a poison). It is also notable that General Lee was prescribed morphine, which, in large enough doses, can cause somnolence and respiratory depression. However, Lee remained reasonably alert until the last 24 hours of his life

Lee was the son of Major General Henry Lee III “Light Horse Harry” (1756–1818), Governor of Virginia, and his second wife, Anne Hill Carter (1773–1829). He was a descendant of Sir Thomas More and of King Robert II of Scotland through the Earls of Crawford.

A top graduate of West Point, Lee distinguished himself as an exceptional soldier in the U.S. Army for thirty-two years, during which time he fought in the Mexican-American War.

*In 1867, Robert Lewis Madison sold his house to Barnas Sears (who replaced Horace Mann as Secretary of the Massachusetts Board of Education and President of Brown University), a distinguished educator who had come to Staunton to administer the Peabody Education Fund (the Peabody Family were Boston Brahmins and also a family of homeopaths and homeopathic supporters).