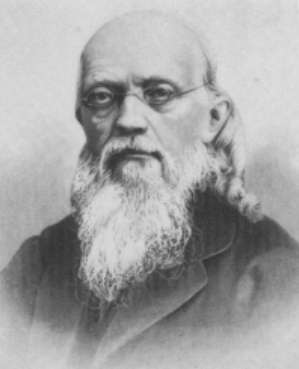 Charles Julius Hempel (1811 - 1879) was a major translator of homeopathic books into the English language, and Chair of Materia Medica and Therapeutics in the Homœopathic Medical College of Philadelphia, and Chair of Homeopathy at the University at Ann Arbor, Michigan.

Hempel was also an adherent of Emanuel Swedenborg and Charles Fourier.

He there made the acquaintance of the celebrated Michelet, successor of Francois Pierre Guillaume Guizot in the Chair of History, and assisted him in the publication of his ”History of France.” He considers his six months’ residence in the Professor’s family as one of the most profitable and agreeable periods of his life.

While attending lectures he became acquainted with many American families resident in Paris, who induced him to emigrate to America. Landing in New York on September 5th, 1835 -the twenty-fourth anniversary of his birthday- he at once applied himself to a thorough acquisition of the English language ; reading the English and American classics with a passionate enthusiasm equaled only by that which he devoted to the Italian language and literature.

Residing for two years in the family of Signor Marancelli, the friend of Silvio Pellico, he there imbibed an ardent love for music and Italian literature, and for the ideas of liberty for which the members of the Carbonari were remarkable, and for which they had been terribly persecuted.

He attended the medical lectures of the University of New York, then recently organized, of which he became one of the earliest graduates. He numbered among his valuable acquaintances some of the most talented literary characters of the city.

All of these were enthusiastic advocates of homœopathy, a system of practice which had won his sympathy and admiration even in his early boyhood. Drs. Hans Burch Gram, Claiming, John Franklin Gray, Hall, and Constantine Hering, and others, among the oldest homœopathic practitioners in New York and Philadelphia, were his friends and constant companions, to whose sympathy and counsel he considers himself largely indebted.

Soon after his graduation he commenced the translation of the leading authorities of homœopathy. (Hempel was employed by the publishing house William Radde in NYC and was responsible for translating most of Hahnemann’s and Gottlieb Heinrich Georg Jahr’s work into English). Among these translations and original works the following are the most prominent : Hahnemann’s Materia Medica Pura, in four volumes ; Hahnemann’s Chronic Diseases, in five volumes ; Jahr’s Symptomen Codex, in two volumes ; Repertory to this last (original) ; Hartmann’s Acute and Chronic Diseases, in four volumes ; Baer’s work on the same subject ; Jahr’s Clinical Guide, one volume, 12mo. ; Jahr’s Mental Diseases and their Homœopathic Treatment, one volume ; Jahr’s Diseases of Women and Children, one volume, 8vo. ; Jahr’s Venereal Diseases, one volume, 8vo. ; Teste’s Materia Medica ;  Small’s Domestic Physician ; Hempel and Beakley’s Domestic Physician ; Hempel’s Domestic Physician; Homœopathic Domestique ; Organon of Homœopathy ; Rane’s Organon of Homœopathy, and Hempel’s System of Materia Medica and Therapeutics.

In addition to these he has translated all of Johann Christoph Friedrich von Schiller’s writings not previously translated, and has superintended the publication of a complete edition of his works in English, by Kœhler, in Philadelphia.

While actively engaged in the practice of homœopathy, he became acquainted with and married his present wife, daughter of the late George Coggeshall, Esq., of Grand Rapids, Mich., one of the founders of that beautiful and flourishing city. He is thus allied with a thoroughly American family, his wife being a lineal descendant of the Hon. William Bradford, first Governor of the colony of Rhode Island, who came over in the ”Mayflower.”

The death of his father-in-law rendered it necessary for him to remove with his family to Grand Rapids, in order to look after the family estates. He was soon engaged in an extensive and laborious practice, aided by his able young friend, Dr. Jacob Reed, Jr., of Philadelphia.

Almost immediately after taking up his residence in Grand Rapids, he was recommended by the physicians of Michigan to the Regents of the University at Ann Arbor, as a proper person to fill the chair of Homœopathy, created in the University by an Act of the Legislature.

The efforts of the homœopathists to have this chair filled in accordance with the law provoked a bitter controversy with the Regents, who have thus far succeeded in evading the law.

Dr. Hempel’s health has been failing for some years past. A visit to his fatherland, and to Rome and Naples, where he spent the winter of 1872, did not result as beneficially as he had anticipated.

He has retired from active life. He has written a work on the ”Life of Christ” in the German language, for the benefit of his German countrymen in America ; a work on ”The True Organization of the New Church,“(of Emanuel Swedenborg and Charles Fourier) and ”A New Grammar of the German Language.”

Dr. Hempel is one of the oldest honorary members of the British Homœopathic Society, and has received the compliment of diplomas and certificates of membership from many American medical colleges and associations.

Friday October 3, 1879 Dr. Charles Julius HEMPEL, an eminent homeopathic physician and medical author, widely known in America and Europe for the past 30 years, died at his residence in Grand Rapids Wednesday night, aged 68 years and 19 days. He had been a resident of Grand Rapids for 18 years.