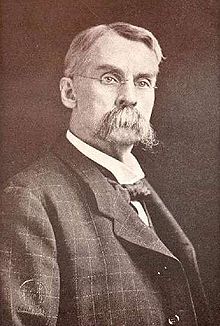 James Tyler Kent Kent 1849 - 1910 is said to have contributed as much to the great homeopathic works as Dr. Samuel Hahnemann, the founder of homeopathy.

Prior to his involvement with homeopathy, Kent had practiced (eclectic) conventional medicine in St. Louis, Missouri. He discovered and “converted” to homeopathy as a result of his wife’s recovery from a serious ailment using homeopathic methods.

When he taught, he would inspire his “Kentians” to use these higher potencies; and he held a strong belief that homeopaths must treat patients in their entirety, including the physical body, as well as the mental/emotional and spiritual elements, using these high potencies.

Later in his career, however, Kent began using Hahnemann’s method of starting with low potencies and working up the scale by threes (6, 9, 12 etc.).

One of his greatest contributions to the profession of homeopathy, and its teachings, was his completely unique style of repertory. Although others exist, Kent’s famous repertory, The Great Repertory, is still the popular choice, and has been described as more complete, systematic and precise — with more well-described symptoms.

Kent is also known for developing “pictures” of constitutional types of patients. A well-known example would be his description of Sulphur as “the ragged philosopher.”

There are many works based on Kent’s principles, including a book by one of his pupils, Margaret Tyler. Margaret Tyler further developed this idea of “pictures” into a book entitled Homeopathic Drug Pictures.

Kent is considered to have been a great homeopath; and his philosophy, homeopathic interpretations and influence have steadily continued to grow in popularity since his death.

James Tyler Kent was born in Woodhul, New York. He graduated from the Eclectic Medical Institute of Cincinnati, and started practice in St. Louis as an Eclectic.

He became interested in homoeopathy in 1878, when his wife’s illness failed to respond either to eclectic or allopathic treatment and was cured by a homoeopath.

Kent began practice with low potencies, but he was not satisfied. Later he resolved to test the 30th potency to see if there was any medicine present. He prepared with his own hands the 30th potency of Podophyllum according to Centesimal scale after the method of Hahnemann.

One day a child was brought in to his clinic in emergency and it appeared that the child would not live long. While it lay in the arms of its mother, a thin yellow fecal stool ran all over his carpet. The odor was like that of the Podophyllum stool. It was horribly offensive, and the stool was so copious that the mother made the remark that she did not know where it all came from.

Dr. Kent thought to test Podophyllum 30 prepared by him for that case. Next morning he was surprised to learn from the grandmother of the child that he was doing well. One dose of Podophyllum cured a dangerously ill patient.

He advocated the use of the 30th, 200th, 1M, 50M, CM, DM and MM potencies made on the Centesimal scale. Dr. Kent introduced the doctrine of ‘Series in Degrees’ in the treatment of chronic diseases. He found that one potency was not sufficient for chronic cases, though it would generally do for acute illnesses.

Many chronic illnesses were cured by keeping the patient under the influence of the one indicated remedy for two or more years. But this cannot be done with continuous curative action, unless the doctrine of ’_Series in Degrees_’ is fully understood and used.

"just as there are octaves of musical tones, so there are octaves in the [simple substance](http://homeoint.org/books3/kentlect/lect08.htm), through which severally it is possible to correspond with the various planes of the interior organism of the animal cells."

Dr. Kent also discovered the ’Law of Vital Action and Reaction’ as pointed out by Dr. Hahnemann.

“A medicine is not too high to cure so long as it is capable of aggravating the symptoms belonging to the sickness; in the first hours in acute, and in the first few days of a chronic sickness.”

Dr. Kent laid greatest importance to the will, understanding and memory of the patient. They form the innermost of the man, and are extended outward through the general physical organism.

Cure takes place from center to periphery, but if the symptoms retreat from periphery to center the prescription is wrong and must be antidoted.

Hence in order to treat successfully, the homoeopath should know the correspondence of organs and direction of cure.

Students from England, European countries, India and other parts of the world sought admission to the institution where he taught the subject. John Weir, Arthur Hill Grimmer, Pierre Schmidt, B.K. Bose, and other famous homeopaths from all over the world were his disciples. He was the President and Trustee of Chicago Homoeopathic Hospital.

In 1874 he married a Baptist like himself, settled in St. Louis and began practice. In 1876 he became the professor of anatomy at the American College of St. Louis.

During the same year, his wife became seriously ill and was cured by homeopath resulting in his complete and enthusiastic conversion to homeopathy…

During the same year, Kent lost his first wife, studied works of Emanuel Swedenborg and adopted his philosophy. Kent met his second wife, Clara-Louise, a practicing physician and diagnosed her as having an incurable iatrogenic miasm of Lachesis due to too many repetitions of dose.

In 1916 Kent went to his country home in Montana to rest and write a ‘real’ book but his catarrhal bronchitis turned to Bright’s disease and he died mostly from years of overwork. James Tyle Kent passed away on June 6 at Sunnyside Orchard, Montana…

James Tyler Kent of Chicago, Illinois, Professor of Materia Medica in Hahnemann Medical College, Chicago, physician, and author of several valuable medical works, is a native of the town of Woodhull, Steuben county, New York, born in 1849, son of Stephen Kent and Caroline Tyler, his wife.

His elementary and secondary education was acquired in Franklin Academy, Prattsburg, and Woodhull Academy, Woodhull, and his higher education in Madison (now Colgate). University, Hamilton, New York, where he came to his degree, Ph. B., in 1868 ; A. M., 1870.

He was educated in medicine in the Eclectic Medical Institute, Cincinnati, Ohio, graduating there in 1871, and the Homœopathic Medical College of Missouri, St. Louis, where he was awarded the diploma of that institution in 1889.

Dr. Kent began his professional career in St. Louis as a physician of the eclectic school, at the same time being actively connected with several eclectic journals in the capacity of writer and also took an earnest part in the councils of the Eclectic National Medical Association.

He was professor of anatomy in the American Medical College, St. Louis, 1877-78. about which time his attention was forcibly directed to homœopathy, through the serious illness of his wife, whose case refused to yield to the treatment either of his own eclectic or the allopathic school practitioners, but was subdued by homœopathic treatment.

He then became a careful student of Hahnemann’s Organon and other works of the new school, with result in his complete conversion to homœopathy, his resignation from the Eclectic National Medical Association in 1879 and his appointment to the chair of anatomy in the Homœopathic Medical College of Missouri, which he held from 1881 until 1883, and Professor of Materia Medica from 1883 until 1888.

Thus for more than thirty-five years Dr. Kent has been a conspicuous figure in medical circles, and for more than twenty-five years in teaching and practice under the law of similia ; and he is looked upon as one of the ablest teachers and exponents of the homœopathic school in America.

His contributions to the literature of the profession are known by their strength rather than their length, and include, more prominently, his ”Kent’s Repertory,” ”Kent’s Homœopathic Philosophy,” and ”Kent’s Lectures on Materia Medica.” 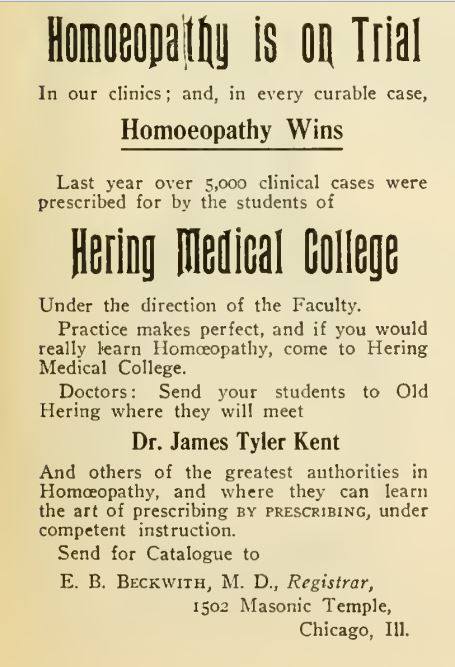