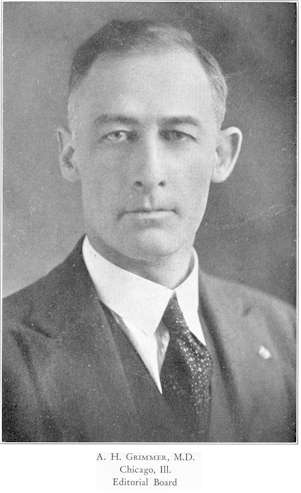 **Arthur Hill Grimmer **1874-1967 graduated from the Hering Medical College as a pupil of James Tyler Kent and he later became his secretary, working closely with him on his repertory. He practiced in Chicago for 50 years before moving to Florida. He was also President of the American Institute for Homoeopathy.

In his book The Collected Works of Arthur Hill Grimmer, Grimmer spoke out against the fluoridation of water and vaccinations. He also decried the use of quick fix pharmaceuticals:

”In chronic troubles the physician’s work is beset with many difficult problems requiring study and patience and unlimited faith, in the power of the similimum; and these are the cases where we rarely find the typical expression of one proving; they are always more or less atypical.

“In recent years chronic disease has been deeply complicated and confused by the universal abuse of the numerous and ever-increasing coal tar and antibiotic drugs that deluge the human race today.

“All these afflictions have increased in a most alarming way during the past ten years. To the disastrous effects of universal drugging is added the deleterious action of processed and adulterated foods; vegetables and fruits contaminated with poison sprays, drinking water everywhere polluted with harmful chemicals, cooking utensils made of aluminium which slowly but surely build up a pathological residue in the organism that results in many forms of degenerative disease.

“All these destructive elements not only depress life forces but inhibit the action of homeopathic remedies. Hence the increased obstacles in the way of successful homeopathic prescribing.”

Grimmer did not have a care-free childhood, and that troubled beginning evolved into a dedicated and engrossing medical career which mirrored his work-filled younger years.

He was the oldest of nine children and, though he had a fairly normal early childhood, that all changed when the family moved from San Francisco to a 160 acre parcel of land in the north of California.

"The twelve years that followed were rugged and adventuresome and beset with many difficulties and tribulations. Money and rations were scant and poor, but game was abundant and wild fruits and berries were plentiful.

“With a little flour, corn meal, coffee, and sugar we were able to survive the first few years of real hardship and privation and were able to procure some chickens and other poultry together with a few hogs and cattle.

“We learned to cope with the elements and vicissitudes of the changing seasons.”

After the second year on the farm his father suffered a terrible accident which left him an invalid, and it was up to Dr. Grimmer to provide for the large family.

At 14 the future homeopathic doctor was forced to leave the farm to seek outside employment. He worked on a ranch and in a mining camp. In the latter he brought in eight dollars a month plus his room and board.

Fortunately, his father was an educated man having a large library which Dr. Grimmer readily partook of. His father, perhaps more fortunately, was a believer in homeopathy and with sixty polychrests and Johnson’s Family Guide he managed to sustain his family during times of illness. This was fortuitous for young Dr. Grimmer as…

“By the time I was seven, I knew most of the indications of those 60 remedies by heart and at that early age I had the urge to be a homeopathic doctor.” (Dr. Grimmer actually cured several people at the age of eight years).

So as you can see, he had a fine foundation and a headstart in homeopathic therapeutics.

During his teenage years in the mountains he met Dr. J.E. Hoffman, who was to become his mentor and preceptor. Dr. Hoffman saw great aptitude in the young lad and guided him to his eventual graduation from the Hering Medical College in 1906 at the age of 32. While in medical. school, he studied under James Tyler Kent, becoming a favored pupil and then associate.

“By the time I reached my junior year, I had made such headway in materia medica, case taking, repertory study and philosophy that the doctor appointed me his quiz master, a place held during the rest of my college course.

“Kent’s lectures were given to both juniors and seniors, and my quiz work was accepted in a rather unusual way, much to my gratification and surprise.

“At this time Dr. Kent was in failing health; he had taken a severe toll from his life energy in the building of the repertory, teaching and carrying on an exhaustive practice at the same time.

“His quiz work and part of his lectures together with a large Saturday afternoon clinic in the Hahnemann College of Chicago were turned over to me to do the best I could with it, a real job and a supreme test for a junior student to undertake. The job was done to the satisfaction of Dr. Kent, the college faculty and the student body.”

Dr. Grimmer, upon graduation, put his “shingle” up and spent over 50 years in Chicago practicing and researching and teaching his beloved homeopathy. He was active in organization work and served as president of the American Institute for Homoeopathy in 1953. From The Collected Works of Arthur Hill Grimmer

Grimmer estimated that he treated several thousand cases of cancer during his career. Grimmer used radionics as a source of information about the potential curative properties of the remedy and to help him cure the case, and used ”electronic homeopathy” in order to bring about homeopathic cures, especially with cancer. Grimmer became quite familiar with the method of Albert Abrams and employed that methodology in his medical practice. He also employed dowsing as a technique in his practice.

Grimmer wrote prodigeously, Gnaphalium, Homeopathic Prophylaxis and Homeopathic Medicine and Cancer: The Philosophy and Clinical Experiences of … with Robin Murphy.