James Smith Ayerst 1824/4 - 1885 was a member of the Royal College of Surgeons of England in 1859 having having graduated in 1847 as Assistant Surgeon to the Royal Navy on the Flag Ship Hibernia, and later on the Hogue, and he went round the Cape of Good Hope on the Maender in 1852.

James Smith Ayerst was a correspondent and homeopathic doctor of Charles Darwin. Ayerst worked alongside James Manby Gully at Old Well House, Malvern Wells 1857–68, and at the Hydropathic establishment at Malvern in the 1850s and had taken over from Gully by 1858. Charles Darwin went to see James Smith Ayerst there for treatment in 1863.

James Smith Ayerst was also a homeopath and he is listed in the Homeopathic Medical Directory of Great Britain and Ireland in 1871, practicing at 2 Belgrade Terrace, Torquay, (between 1868–84).

The legal side of the Ayerst family may have travelled to Canada on official Colonial business, as by 1876 in the court of appeal in Ontario we see Ayerst vs Jenkins (contract law, Mortgages, Pledges, and Liens), Ayerst vs McClean and others. F W Ayerst_ _is mentioned in the Proceedings of the Royal Colonial Institute (Canada) in 1881.

Some members of the Ayerst family had already immigrated to Canada and to America, as the surname is well represented on both sides of the Atlantic and the connections between both branches of the family do seem to be vibrant, through travel, trade, law (Ayerst 1823 Michigan) and religion.

Hooker Ayerst from Faversham in Kent was 1855 London Commissioner of Oaths, and a Hooker Henman Ayerst born 1854 -1930 was a famous British chemist who contributed to The chemical news and journal of physical science in Oxford England in 1879.

A Francis Ayerst was also mentioned in the The Lancet_: _A Journal of British and Foreign Medical and Chemical… in 1865. Gordon Geoffrey Ayerst associate of the Royal Institute of Chemistry University of California 1956 and also listed in the Who’s Who of British Scientists in 1970.

William Ernest AYERST 1900 - 1963 in Ontario. OCCUPATION: Druggist seems the most likely contender for WES Ayerst who founded the Ayerst, McKenna and Harrison Ltd in 1925.

William Edward Ayerst (1823- 1890), brother of James Smith Ayerst (1824-1885) was a member of the Committee of the Metropolitan Homeopathic Hospital for the Diseases of Children and Vaccine Establishment, alongside William Vallancy Drury, Charles W Luther, A H MacDonald, David Wilson, William Edward Ayerst 1830 - 1904 was was a colleague of Frederick Hervey Foster Quin, the first President of the British Homeopathic Society, and Marmaduke Blake Sampson, the Chairman of theBritish Homeopathic Association, and many other homeopaths. 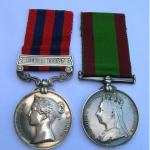 THE REV. WILLIAM AYERST (1830-1904) M.A. The Rev. William Ayerst was born in Germany on the 16th March 1830, the son of another Rev. William Ayerst MA. He was educated at King’s College, London and Caius College, Cambridge, where he won the prestigious Hulsean and Norrisian prizes for theology. He became a Bengal Chaplain in 1861 and was Senior Chaplain to the Kyber Field Force during the 2nd Afghan Campaign of 1879-81. He was the Principal of Ayerst Hall, Cambridge (which he founded) from returning to England until 1899. He was the author of a number of important theological works, including “Christianity of Language”. He died on the 6th April 1904.

In the 1860s, John and Frank Wyeth opened a drug store in Philadelphia:

‘… My Dear Friend… Now for business. I have long thought that there is room in London for a great American depot of all homeopathic & allied things. Boericke and Tafel could achieve this, why not, like Wyeth, and Boroughs, Wellcome & Co. move in this direction?…’ (_Swedenborg Archive K125 [2] Letter dated 23.12.1895 from James John Garth Wilkinson to William Boericke). _

From http://en.wikipedia.org/wiki/Wyeth In 1862, on the suggestion of doctors, they began to manufacture large quantities of commonly ordered medicines. They were successful, and in 1864 they began supplying medicines and beef extract to the Union army during the Civil War.

In 1872, Henry Bower, an employee of Wyeth, developed one of the first rotary compressed tablet machines in the United States. This enabled the mass production of medicines with unprecedented precision and speed. It was massively successful, and the Wyeth brothers won multiple awards at the Centennial Exhibition.

John Wyeth died in 1907 and his only son, Stuart, became the company’s president. American Home Products, the holding company now known as Wyeth, was incorporated on February 4th, 1926. The Whitehall building in downtown Manhattan became the corporation’s first headquarters.

Global sales became stronger due to the sales of Wyeth’s Kolynos brand of toothpaste. In 1929, Stuart Wyeth died and left controlling interest to Harvard University.

In 1924 William Harrison, Ontario sales manager of a Canadian drug company, became interested in a report that liver oil from cod caught off the Grand Banks of Newfoundland was a much richer source of vitamin A than the Norwegian oil.

In January 1925 Harrison and associates, W.A.S. Ayerst, Hugh McPherson and W.J. McKenna, incorporated as Ayerst, McKenna and Harrison Ltd. Letters of patent not only granted the company rights to “produce, manufacture, purchase, sell, import, export chemicals, drugs and medicines of all kinds,” but also some rights it never used, eg, “to sell snuff, spices, leaf tobacco, cheroots, shellacs, and crockery.”

In 1929 Ayerst introduced the first cod liver oil concentrate in capsule form, under the brand name Alphamettes, a product that became available in pharmacies in Canada and the US for many years until the development of multivitamin formulations.

In 1925, Ayerst, McKenna & Harrison Ltd. was founded in Canada by W.A.S. Ayerst, W.J. McKenna, W.H. Harrison and H. McPherson. They formed an early association with McGill University and began to develop and produce many new biological products.

In 1943, Ayerst Laboratories joined AHP. In 1945, the Rouses Point site and the International Chemical Workers Union (ICWU) formed a partnership and established Local 95C ICWU. The Rouses Point facility continued to grow in size and in 1967 a 12,000 square foot Chemical Pilot plant was built for specialized chemical manufacturing and laboratory space.

In 1969 a two million dollar research complex was built in Chazy, New York on land purchased from the William H. Miner Agricultural Research Institute. In 1987 an amalgamation of Wyeth and Ayerst formed Wyeth-Ayerst.

J.C. Collip, co-discoverer of insulin in 1922, was a Ph.D. biochemist from the University of Toronto in 1916 and Chair of the Department of Endocrinology at McGill University in 1929 when he and his medical research team were approached by W.J. McKenna of Ayerst, McKenna & Harrison to carry out studies on placental hormones.

Their research led to the production in 1930 of Emmenin, the first orally active estrogen. This discovery was but the first of a series of research steps that eventually lead to the discovery of the estrogenic complex, Premarin, that Ayerst laboratories began marketing worldwide in 1941.

In 1943, Wyeth merged with Ayerst, McKenna and Harrison, Ltd. of Canada. With this merger came Premarin, the world’s first conjugated estrogen medicine, which to this day is one of Wyeth’s flagship products. Wyeth was one of 22 companies selected by the government in 1944 to manufacture penicillin for the military, and later for the general public.

The English geneology of the Ayerst surname goes back to Anglo Saxon times:

This unusual surname is of Anglo-Saxon origin, and is a dialectal variation of the locational surname Hayhurst, from the place so named in the parish of Ribchester, Lancashire.

The derivation of the placename is from the Olde English pre 7th Century “hoeg”, meaning “enclosure”, and “hyrst”, a hillock or knoll, especially a wooded hill.

Locational surnames, such as this, were usually acquired by a local landowner, or by the lord of the manor, and especially by those former inhabitants of a place who had moved to another area, usually in search of work, and were thereafter best identified by the name of their birthplace.

Recordings from London Church Registers include: the christening of Anne, daughter of Jerome and Christian Ayerst, on August 13th 1617, at St. Dunstan’s, Stepney, and the marriage of William Ayerst and Mary Southerne on October 23rd 1628, at St. Vedast, Foster Lane and St. Michael Le Querne.

The family Coat of Arms is a silver shield, on a blue bend engrailed a gold sun in chief, and an eagle wings elevated of the field in base; in the sinister chief point a red cross flory.

The first recorded spelling of the family name is shown to be that of Thomas de Heyhurst, which was dated 1246, witness in the “Assize Court Rolls of Lancashire”, during the reign of King Henry 111, known as “The Frenchman”, 1216 - 1272.

Surnames became necessary when governments introduced personal taxation. In England this was known as Poll Tax. Throughout the centuries, surnames in every country have continued to “develop” often leading to astonishing variants of the original spelling.

In the 165os a James Smith Ayerst and a Rev. Robert G Ayerst obtained the Manor at Halmede or Halls Court in Kent.

Rev. William Ayerst (Missionary and Abolitionist) in Canada and in England, author, Bishop of Natal 1887 and member of the Bishop of London’s Committee.

From 1884 to 1896 William Ayerst ran a private hostel (Ayerst Hostel at his old college Cambridge) which was housed on Mount Pleasant. When this was closed the buildings were occupied by St. Edmund’s House, an institution for men training for the Roman Catholic secular priesthood.

In 1898 St. Edmund’s House applied for recognition as a public hostel. Once again the spectre of denominational education was abroad. The application was supported by some very influential people; Henry Sidgwick, for instance, thought it gross partisanship to refuse to Roman Catholics what had already been granted to Anglicans.

Francis Ayerst (attorney - London partnership with John Dickinson dissolved 1841) and Thomas Ayerst (British military lieutenant 1860 and doctor MRCS 1893) were listed in the Battle polling district in 1837. Frank Ayerst was a soldier in the Australian regiments which fought in South Africa in 1899. The family appear to have been gentlemen farmers, vicars, legal attorneys and merchants in Kent (a J Ayerst corn merchant of Kent went bankrupt in 1805 and in 1936 an Albert Ayerst Hooker was writing books on The International Grain Trade) and South East England for centuries, and like most English families they contributed people to most of the British Colonies one way or the other.

Mr. Ayerst is the son of Mr. and Mrs. Everton Ayerst of Depauville. Mr. and Mrs. Ayerst will reside at Antwerp where he is employed at the Borden milk plant. Allan AYERST 1891 in Ontario.Charles Frederick AYERST 1898 -1969. William Ernest AYERST 1900 - 1963 in Ontario. OCCUPATION: Druggist