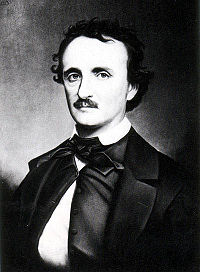 Edgar Allan Poe 1809 – 1849 was an American poet, short-story writer, editor and literary critic, and he is considered part of the American Romantic Movement.

Best known for his tales of mystery and the macabre, Poe was one of the earliest American practitioners of the short story and invented the detective-fiction genre. He is credited with contributing to the emerging genre of science fiction.

Poe’s life was undoubtedly tragic, but his brilliance shone through it all. He knew some of the great people of his age and he packed a great deal into his short and anguished life.

Poe knew all of the homeopaths and homeopathic supporters of his time.

Mary Gove Nichols emigrated to England in 1861 to show her opposition to the Civil War where she met Edgar Alla Poe. Mary Gove Nichols was a strong supporter of homeopathy and she found her cure from tuberculosis in homeopathic treatment. Her husband Thomas Low Nichols was an orthodox doctor who converted to homeopathic philosophy. Her first husband Hiram Gove eventually became a homeopath.

Poe uses homeopathic characters in his novels, as does Nathaniel Hawthorne, his colleague and fellow author:

Barnum offers to fund the trip from New York if Poe will stop in Boston to pick up items from a killer who hung himself.

Poe agrees and with his spouse Sissy stay at the home of the sister-in-law of a friend of Barnum, Mrs. Randall. While there Poe helps prove to the police that Elise Belton, whom he met at a show given by dentist Dr. Marston, was murdered instead of accidental drowned.

In Concord, Dr. Farragut accepts Sissy as a patient, but his medicines are stolen by he believes his enemy Dr. Cassidy, who calls him a quack.

Poe returns to Boston where he becomes embroiled in a series of murders that include the deaths of the dentist Dr. Marston, as well as Mrs. Randall, her maid, Ms Belton and daguerreotypist Herbert Ballinger.

Poe assumes a serial killer is at work, but to prove it before returning to Concord is impossible.

Harold Schechter portrays Poe as a person who believes in his own genius as he has a high opinion of himself. His love for his wife which means risking his life for her keeps Poe from being totally insufferable. There is some graphic violence in some scenes as Poe’s tales are not for the faint of heart.

The complexity of the murders and Poe’s subsequent investigation make The Tell Tale Corpse an entertaining historical who-done-it.

After his brother’s death, Poe began more earnest attempts to start his career as a writer. He chose a difficult time in American publishing to do so.

He was the first well-known American to try to live by writing alone and was hampered by the lack of an international copyright law. Publishers often pirated copies of British works rather than paying for new work by Americans.

The industry was also particularly hurt by the Panic of 1837. Despite a booming growth in American periodicals around this time period, fueled in part by new technology, many did not last beyond a few issues and publishers often refused to pay their writers or paid them much later than they promised.

Poe, throughout his attempts at pursuing a successful literary career, would be forced to constantly make humiliating pleas for money and other assistance for the rest of his life.

Poe’s life was disfigured with alcohol and possibly drugs, but also from poverty and family feuds, and indeed, feuds with his friends and colleagues.

On October 3, 1849, Poe was found on the streets of Baltimore delirious, “in great distress, and… in need of immediate assistance”, according to the man who found him, Joseph W. Walker.

He was taken to the Washington College Hospital, where he died on Sunday, October 7, 1849, at 5:00 in the morning.

Poe was never coherent long enough to explain how he came to be in his dire condition, and, oddly, was wearing clothes that were not his own. Poe is said to have repeatedly called out the name “Reynolds” on the night before his death, though it is unclear to whom he was referring.

All medical records, including his death certificate, have been lost. The precise cause of Poe’s death remains a mystery.

Newspapers at the time reported Poe’s death as “congestion of the brain” or “cerebral inflammation”, common euphemisms for deaths from disgraceful causes such as alcoholism.

Many theories have been suggested, including delirium tremens, heart disease, epilepsy and meningeal inflammation. One of the most common beliefs is that Poe was a victim of cooping, first suggested as early as 1872.

Despite or maybe because of his tragic life, Poe’s legacy is vibrant and alive today, with many pale copies but no masters:

Poe’s best known fiction works are Gothic, a genre he followed to appease the public taste. His most recurring themes deal with questions of death, including its physical signs, the effects of decomposition, concerns of premature burial, the reanimation of the dead, and mourning.

Many of his works are generally considered part of the dark romanticism genre, a literary reaction to transcendentalism, which Poe strongly disliked. He referred to followers of the movement as “Frogpondians” after the pond on Boston Common. and ridiculed their writings as ”metaphor-run”, lapsing into “obscurity for obscurity’s sake” or “mysticism for mysticism’s sake.”

Poe once wrote in a letter to Thomas Holley Chivers that he did not dislike Transcendentalists, “only the pretenders and sophists among them.”

Beyond horror, Poe also wrote satires, humor tales, and hoaxes. For comic effect, he used irony and ludicrous extravagance, often in an attempt to liberate the reader from cultural conformity.

In fact, ”Metzengerstein”, the first story that Poe is known to have published, and his first foray into horror, was originally intended as a burlesque satirizing the popular genre.

Poe also reinvented science fiction, responding in his writing to emerging technologies such as hot air balloons in ”The Balloon-Hoax“.

Poe wrote much of his work using themes specifically catered for mass market tastes. To that end, his fiction often included elements of popular pseudosciences such as phrenology and physiognomy