Mary Corinna Putnam Jacobi 1842 - 1906 From the wealthy and well-connected Putnam publishing family, Jacobi graduated from the homeopathic Female Medical College of Pennsylvania and worked at the homeopathic New England Hospital for Women and Children in Boston.

As lecturer on materia medica from 1871, and Professor of Materia Medica and Therapeutics from 1873 to 1889, she helped raise educational standards. 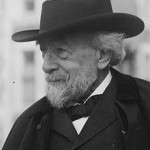 Abraham Jacobi 1830-1919 was a pioneer of paediatrics, opening the first children’s clinic in the United States. To date, he is the only foreign born president of the American Medical Association.

Abraham Jacobi was given employment by the homeopathic Wesselhoeft Brothers when he had been living in a flea ridden flat in Boston with a German friend, editing a German newspaper, where he was a correspondent of Karl Marx (Alexandra Minna Stern, Formative years: children’s health in the United States, 1880-2000, (University of Michigan Press, 16 Mar 2004). Page 40). Jacobi was also a friend of Friedrich Engels (Eugene P. Link, The social ideas of American physicians (1776-1976): studies of the humanitarian tradition in medicine, (Susquehanna University Press, 1 Dec 1992). Page 279.

Mary Putnam Jacobi was an esteemed medical practitioner and teacher, a harsh critic of the exclusion of women from the professions, and a social reformer dedicated to the expansion of educational opportunities for women. She was also a well-respected scientist, supporting her arguments for the rights of women with the scientific proofs of her time.

Mary Corinna Putnam was born in 1842, in London, England to American parents, George Palmer Putnam and Victorine Haven Putnam. Her parents returned to America in 1848.

Mary spent her childhood and adolescence in New York, and was first educated at home by her mother, later at a private school in Yonkers, and then at a public school in Manhattan.

At age 17 Mary published an essay in Atlantic Monthly (April 1860). Throughout her life she penned both political essays and fiction, but is best known for her career in medicine, and over 120 scientific articles and 9 books.

Mary Putnam studied at the New York College of Pharmacy in 1861, and received her M.D. from the Female (later Woman’s) Medical College of Pennsylvania in

Putnam got her first chance to practice medicine from a fellow graduate, Marie Zakrzewska, who founded the New England Hospital for Women and Children in Boston in 1862. In 1866 Putnam moved to Paris to further her medical training, and supported co-education for men and women, arguing that women’s medical schools could not provide the same training and clinical practice as at established universities affiliated with large hospitals. (After 2 years of efforts, she became the first woman of any nationality to be admitted to the prestigious Ecole de Medecine).

Soon she returned to New York and organized the Association for the Advancement of the Medical Education of Women (later the Women’s Medical Association of New York City) in 1872, serving as its president from 1874 to 1903.

During the same period, she lectured at the Women’s Medical College of the New York Infirmary for Women and Children. As lecturer on materia medica from 1871, and professor of materia medica and therapeutics from 1873 to 1889, she helped raise educational standards.

Putnam married homeopathic supporter Dr. Abraham Jacobi in 1873. (Jacobi was offered employment by a German homeopath named Wesselhoft… He gave the inaugural address to the Hahnemannian Monthly in 1882 and received thanks from the Californian homeopaths in 1885-6, and Abraham repeatedly supported homeopaths in his own writings)

Later called the “father of American pediatrics,” he was instrumental in negotiating Mary’s admittance to the medical societies of New York.

The Jacobis had three children, though their first daughter died at birth and their only son died at age seven.

In 1876, Dr. Mary Jacobi’s essay, ”The Question of Rest for Women during Menstruation,” won the Boylston Prize at Harvard University. In this influential paper she refuted the supposed physical limitations of women, in response to Dr. Edward H. Clarke’s publication Sex in Education; or, A Fair Chance for the Girls (1873), which questioned the expanded role of women in society and the professions.

Dr. Jacobi provided tables, statistics, and sphygmographic tracings of pulse rate, force, and variations to illustrate the stability of a woman’s health, strength, and agility throughout her monthly cycle. Both her paper and her example offered irrefutable proof of the accuracy of her position.

As an attending and consulting physician, Mary Jacobi opened a children’s ward at the New York Infirmary in

Dr. Jacobi’s admission to the Academy of Medicine, earned by a majority of one vote, made her the society’s first female member.

Before her death at age 63, Jacobi wrote a detailed account of her illness, ”Description of the Early Symptoms of the Meningeal Tumor Compressing the Cerebellum From Which the Writer Died. Written by Herself.” Mary wrote over one hundred papers in her professional lifetime. Many prominent physicians, including William Osler and Emily Blackwell, honored her at her funeral.